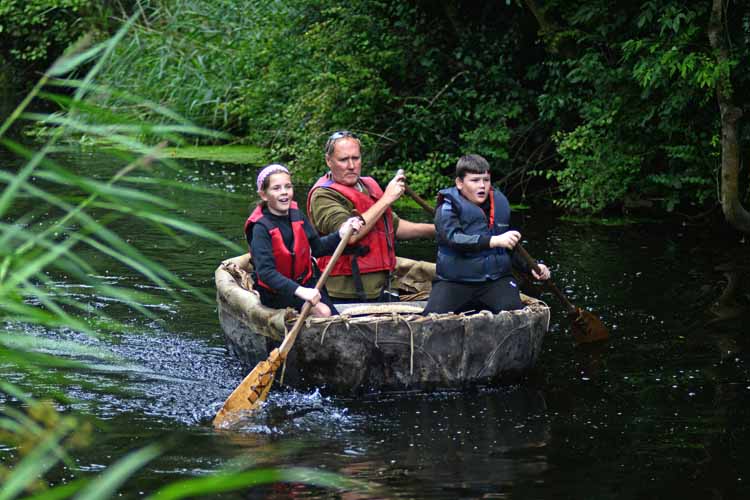 The sound of children’s laughter rang out along the Boyne Valley yesterday afternoon at Oldbridge. It was a joy to hear it.

This is the place where the famous battle was fought in 1690 – you know the one, the Battle of the Boyne, it’s often referred to as the most decisive battle in European history or some such guff.

Well, it might have decided which power-mad branch of the aristocracy got to rule, but for the people they rule over it hasn’t worked out so well.

Which is my clumsy way of saying that for the less privileged people in this republic, the one where all our children are supposed to be cherished equally, life can be tough.

The children enjoying themselves in Oldbridge yesterday are from the Moneymore area of Drogheda which has itself been the scene of many battles in more recent years, with the children who live there sometimes ending up as collateral damage.

The children I met in Oldbridge are all members of the Moneymore After School Club who were enjoying a couple of hours learning to paddle Boyne Currachs under the tuition of Cladhbh O’Gibne and his crew who build the boats to an ancient design in a workshop near Newgrange.

It was obviously great fun for the children, but boating is about more than having fun it is a life lesson in working together to get moving in the direction you want to go.

This is the bedrock of organisations such as the Moneymore After School Club – giving kids who may have been born on the wrong side of the tracks what they need to become full and productive citizens, to play a useful and positive role in society rather than be tempted by the men and women of violence and criminality.

The dedicated staff at the Moneymore After School Club have been carrying out this valuable work since 1997 and, despite their tiny budget and equally tiny and unsuitable premises, they have been doing a brilliant job. In 2009 they were given an excellence award by the Ombudsman for Children.

They’ve struggled on through Covid and are now half way through their 2021 summer camp which the Boyne Currachs visits are part of.

But now, despite all of the promises over the years, their funding is in danger of being cut thanks to a change in the system.

Last year the Minister for Children, Equality, Disability, Integration and Youth, Green Party TD Roderic O’Gorman, changed the rules of how organisations such as the After School Club are funded, making it harder for children to meet the requirements for funding.

Edel Fairclough, the Afterschool Club Coordinator, told Drogheda Life that she sees the role they fulfil as not so much childcare as child development but those in the Department have adopted a narrower view on the new rules.

“At the moment, I want to encourage parents and children to apply, to demonstrate the need in the area” Edel said.

“We've always had a very long waiting list but now of course people have stopped applying as they don't qualify.

“Over the years we have had hundreds of children attend from the area but now it is in danger of closing as we no longer receive subsidy unless parents are working or studying.”

Edel and her colleagues are lobbying hard and recently met with the Minister to share their concerns but, as things stand, closure seems more likely than expansion for this most essential of services.

Here are some comments from parents who wanted to get a sibling into the Club but couldn’t because of the rule changes:

"My eldest daughter who is now 23 was diagnosed with both dyslexia and dyspraxia at age eight. She said the best support she ever received was through the Moneymore homework club. They made a huge difference to her confidence and allowed her to realize her ability. She now has an honours degree in Graphic design, an ordinary degree in arts and technology and a level 5 in photography.  I would like to thank all of the staff for the support and time you have given to her and our family. I know the outcome first hand this assistance gives. I hope you will be around for a long time so that we can lean on your support again with my younger daughter. It makes what is ahead much less scary. Thank you"

“Thank you all so much for everything over the years, as I said to you before, her teachers in the Presentation often commented on her homework being so good when in the After Shool Club. It’s an amazing service you provide, I hope if circumstances change my other kids will be able to avail of it in the future."