Anthony Murphy shines a light on life in ‘Return to Segais’ 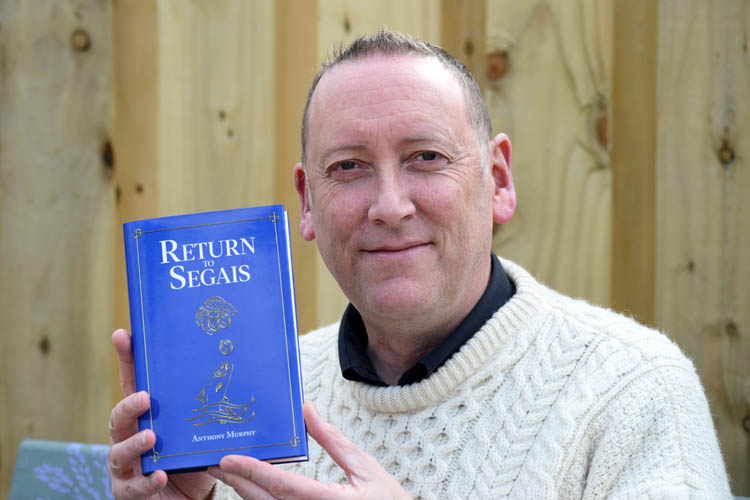 Anthony Murphy with a copy of his new book ‘Return to Segais’.

The unstoppable march of technology has meant that the clackety clack of dozens of manual typewriters being frantically pounded by reporters in a busy newsroom is a sound that will probably never be heard again.

Being the son of a journalist, one who followed in his father’s story telling footsteps, it is a sound that Drogheda author Anthony Murphy may well have experienced in his youth. It is certainly in his blood.

All of the senses, including sound, are evoked in the language of Murphy’s seventh book ‘Return to Segais’ for which he eschewed modern technology in favour of the most basic communication tools, pen and ink.

‘Return to Segais’ is inspired by the mythical well that was said to have been the source of the river Boyne, and the journey of the Salmon of Knowledge from the spawning pools out to the Atlantic Ocean and back again.

The decision to write the book by hand was an inspiration. Throughout this journey through history, geography, fact and fantasy the language flows at times gently and occasionally more rapidly. Somewhere in this rock pool is the very essence of  life.

This book was shaped by time itself; time spent observing nature at work, time studying the history and mythology of a locale so dear to the author and time spent waiting for just the right words to present themselves.

Murphy’s fascination with the mythology and ancient history of the Boyne Valley combined with his love of words shines through on every page, like the sun reflecting off the river itself, it illuminates more than just the surface of the water.

“Although it is ostensibly a work of fiction, ‘Return to Segais’ is not a novel, Murphy says. “It is greatly inspired by the mythology of the Boyne Valley, but it doesn’t have a plot or characters other than those found in the myths of the river Boyne.”

“It’s difficult to categorise because it is a work that flows from some unknown wellspring, a mystical source from which the poets of the ages have drawn the waters of inspiration for their work.”

“It is best described as a mytho-poetic journey into the depths of the human conscious and unconscious mind, using the symbols, characters and metaphors of myth as way-markers on that journey,” Murphy said.

“This is a work of literary fiction. It is very different to anything I have written before, and yet there will still be many similarities to my previous published work.”

He told the story of how the book came to be inspired, and how it was written, which is a little bit unconventional by today’s standards.

The inspiration for ‘Return to Segais’ is drawn from many sources, including the mythology of the area and the locations of the Boyne Valley. Drogheda, Brú na Bóinne, the Boyne Estuary and Slane all feature very prominently.

“I was standing at the edge of the Boyne about five years ago in Slane. I had my camera with me. Suddenly a salmon jumped over the floodgate beside the big weir in the river there. Over the next couple of hours, I watched as countless salmon made their way back up the river, over the weir and the floodgate. It was hugely impressive watching them making their leaps. Sometimes they were successful. Sometimes they would have to make a second or third attempt.”

“Seeing that journey of the salmon inspired me enormously. It was a most extraordinary sight. These fish go all the way out into the Atlantic, a journey of perhaps several thousand miles, but they are able to come right back to the places where they were spawned, with pinpoint accuracy. I found that extraordinary, and amazing.”

In 2018, at Easter, he began hand-writing the book into a beautiful hardback notebook which he had received as a gift from a long-time friend, Laura Murphy. “I wanted to write something very different, but special. I did not want it to follow any specific conventions, and I had no interest in word counts or plots or plans. I just wanted it to flow, like the Boyne flowing from Segais to the sea.”

“I completed the book in February 2019 and began the long process of editing and proofreading, which was helped along the way by several friends who offered to be beta readers. The book was finally ready for publication at the beginning of this year and I was very grateful for the support of the Mythical Ireland community online, who helped to fundraise for its publication.” 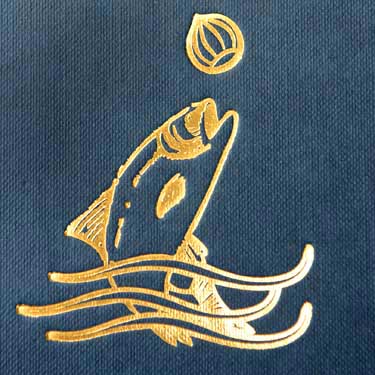 The book was printed by Anglo Printers and is Murphy’s first hardback book. The case of the book is imprinted with a specially commissioned artwork by Irish artist Seán Fitzgerald. It features an image of the salmon jumping from the waters of Segais to catch a hazel nut (cnó) falling from the sacred trees which were said to grow around the well.

Local readers will find lots in it to interest them. “Drogheda has a very special place in my heart and I wanted to make sure that the book didn’t ignore the ‘Bridge at the Ford’ and Amergin’s mound (Millmount) in favour of places like Newgrange and Tara.”

“In fact, Amergin is quite central to the story because he was the ‘original’ bard of Ireland, and his name could be translated as “birth of song” which informs my own efforts to create something that is both mythic and inspiring.”

Return to Segais represents an effort to explore the human experience of life, and our interactions with nature and the landscape, through the metaphors of our myths which have survived for many ages of human habitation along the banks of the majestic Boyne.

It represents an extraordinary journey. I hope readers enjoy it.

Return to Segais is available online at www.mythicalireland.com and retails at €21.99. All copies are signed by the author. The book will also be available on Amazon Kindle and Anthony plans to produce an audio book in the near future.