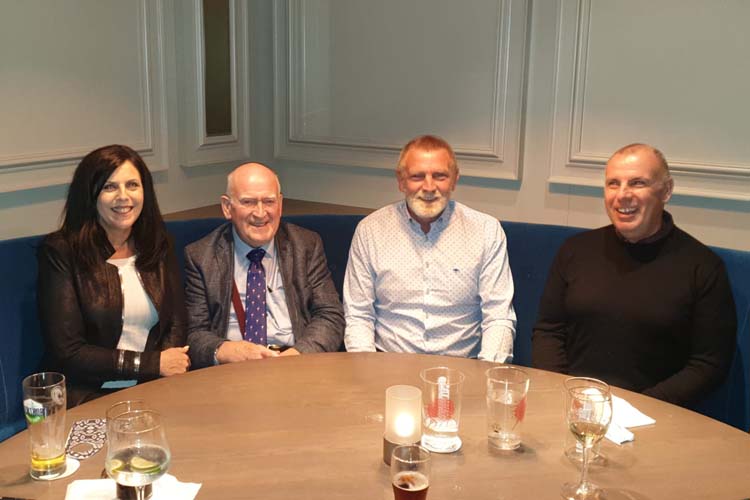 Paul Muphy with John (second from right), who he found as a baby in a phone box in Laurence Street in 1965 along with Helen Ward and David McBride prior the siblings' appearance on the Late Late Show on last Friday night.

Paul Murphy, the man who found a newborn baby boy abandoned at a phone box in Drogheda on a freezing cold night in May 1965, got to meet him again on Friday night prior to the Late Late Show along with his two birth siblings who were also abandoned shortly after birth.

The story of the brother and sister being reunited and the mystery surrounding their abandonment has been making headlines all week.

That mystery was solved with the help of ITV’s Long Lost Family - Born Without Trace programme which last year revealed that a baby girl found in a phone box in Dundalk and a baby boy found in a GPs car in Belfast, both babies also born in the 1960s, were in fact siblings.

On the programme this coming Tuesday night they update the story to reveal that the Drogheda baby, now named John, is also a full sibling and we see the trio being reunited.

Paul Murphy met John (56), his sister Helen Ward and brother David McBride before they appeared on the Late Late Show on Friday night.

Paul said, “meeting Helen and David for the first time was another intensely emotional moment for me, similar to the moment when I first met John when he ‘came back’ to Drogheda in 2013” after John tracked him down.

“It is like a modern-day miracle that is never ending.”

“There is an intensity of emotion when you see these three people together.  They have a lot of catching up to do and they are discovering new things about each other every day.”

Paul revealed that while Helen and John “were very comfortable with the Late Late Show exposure because their reunion had already been well covered a number of years ago, John told me he was very nervous before he went on the show, but Ryan Tubridy put him at his ease.”

John is now happily married and a father himself.

It emerged that John’s daughter saw the initial programme where Helen and David were reunited and thought there was a physical similarity with her Dad.

DNA testing revealed the full extent of that similarity.

Paul said, “it is amazing that without the advances in science and DNA since he was born, we would never know this.  Without them his chances of discovering any of his family would have been extremely slim.”

He said himself and John are in regular contact and “have formed a strong bond of friendship.  My own dear brothers are now deceased and I look on John as another brother.”

The full story, including John meeting his siblings, is included in the programme Long Lost Family Special Born Without Trace: What Happened Next on ITV at 9pm on Tuesday (14th September).