Trinity Gardens residents to protest over apartments plan this Saturday 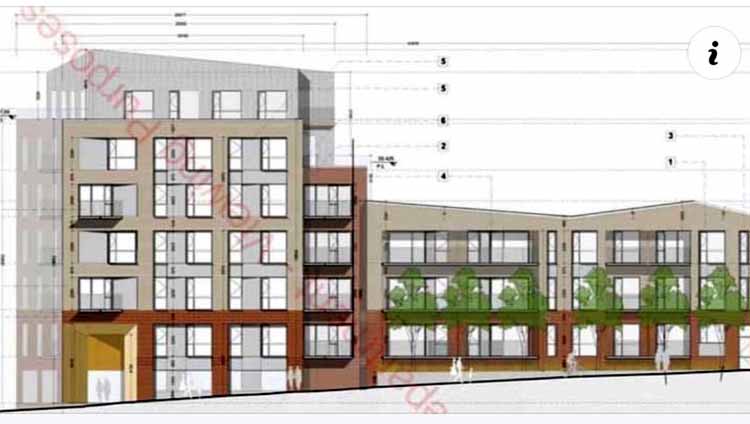 An architect's drawing of the controversial development.

Trinity Gardens residents are seeking the public’s support for a public protest they have organised for 1.00 on Saturday the 22nd of January at the Georges Street / Trinity Gardens junction to highlight their opposition to the seven storey apartment block being planned by the building company Urban Life Ltd.

The residents have been fighting this development, which they say is totally inappropriate for the site, since it was first proposed by Urban Life in August 2020.

Among their objections is that the proposed development will further exacerbate the already chaotic traffic situation in George’s Street and that the building will overlook their single storey homes and block their light.

“This short symbolic protest is to keep the message out there to remind Urban Life and the general public that the residents of Trinity Gardens/ Georges Street and Patrick Street do not want high rise development on the Swan Yard site" said residents spokesperson, Teresa McKenna.

“We intend to submit our Appeal to An Bord Pleanala by the 20th of January deadline and it will clearly state that this seven storey monolith does not fit in with the area and will not deliver on sustainable homes for those seeking long term solutions for their housing needs.

“We will highlight the lack of consultation awarded to residents at all stages of the planning process and we will also highlight that we want development on this site and for it not be left in its current derelict state.”

She added that all of the Local Councillors have been very supportive throughout this planning process and they have been invited to attend the protest on Saturday as well as the three local TD's.

The plan, which got the go-ahead from Louth County Council in December 2021, is for 57 ‘Build to Rent’ apartments in a block ranging in height from three to seven storeys.

The residents were bitterly disappointed when the permission was granted, especially as they were never consulted by either the Urban Life or the Council, and they launched a GoFundMe appeal to raise the funds to pay for the professional services required in lodging an appeal.

The site for the proposed development covers a site currently occupied by five houses on Georges Street and Trinity Gardens which have been allowed to deteriorate to the stage where they are now an eyesore and will be demolished to make way for the development.