An old publicity photo for Trenchtown - the picture looks like it was taken at the port.

Gig of the weekend must be a special celebration of the life of former Trenchtown frontman David “Leso” Leslie which takes place  in Mc Hughs this Saturday night to mark the second anniversary of his passing.

Leso played in many bands around Drogheda but will be forever remembered as the front man with the ever popular ska band Trenchtown.

He was an amazing musician, a prolific songwriter and entertained the people of not only Drogheda, but the country, for over thirty years.

Saturday night’s gig in Mc Hughs will be a celebration of the man himself, and also the music that he entertained so many of us with. It should prove to be a great night indeed.

Members of Trenchtown who played with Leso for so many years will play the songs that he wrote. Also on the night XSLF will play the music of Stiff Little Fingers.

Kenneth Tuite who played drums with Trenchtown for most of those decades remembers Leso fondly. “I was lucky to have been able to play in Trenchtown with Leso. He was such a talent and a huge loss to the music scene in Drogheda and beyond. I still play with bands and every time I sit behind the drum kit I think about him.”

Another person who has great memories of Leso is Cllr Paddy Mc Quillan. “I miss Leso every day. We were great friends and I was so lucky to have been in a band with him. He was such a talent” said McQuillan.

“Anyone who ever saw Trenchtown will know how brilliant they were and it was his songs that made them so amazing. Saturday night should be a great night and I’m really looking forward to hearing his music again.

“ Its brilliant that the members of Trenchtown are doing this and a big shout must go out to Al Cooney and all the staff and management of Mc Hughs for hosting this special occasion. Its going to be a great night and I’m sure there will be a good crowd there.” 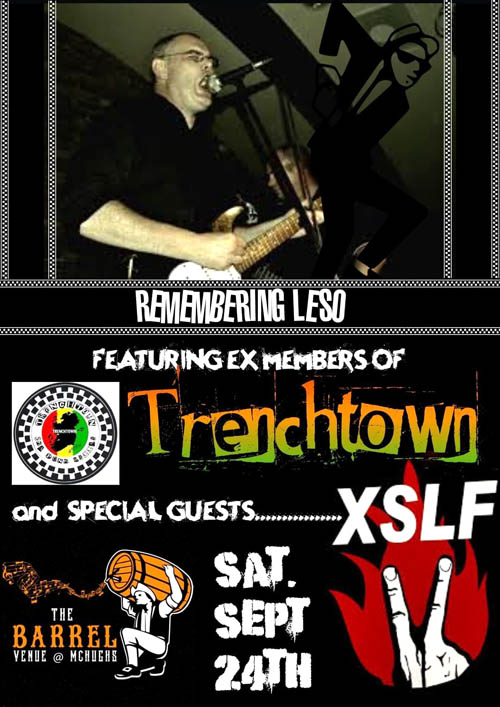