The Old Drogheda Society will be hosting its Annual John Boyle O'Reilly School in the Governor's House, Millmount on Saturday July 2nd.

This year’s  theme is “Divided Families The Civil War in Drogheda" and examines the social and political scene in Drogheda and its surroundings as the Irish War of Independence ends and Irish Civil War begins in June 1922.

Talks will give new insights into the Civil War in Drogheda, and the incidents surrounding the shelling of Millmount Tower just one hundred years ago as well as details of the conflict in Louth, and the impact it had on ordinary people living in Drogheda and its surrounding districts.

In addition to this there will also be a talk on the Irish involvement in the military service of France and Great Britain over two centuries including in the Battle of Waterloo to better understand how Irish military service evolved in the century before the Civil War.

This will be followed by a tour of the Battle of Waterloo Exhibition recently opened in Millmount Tower.

Tickets €15, including Lunch, are available from The Governor’s House, Millmount or Tel: 041 – 9833097 or online from Eventbrite 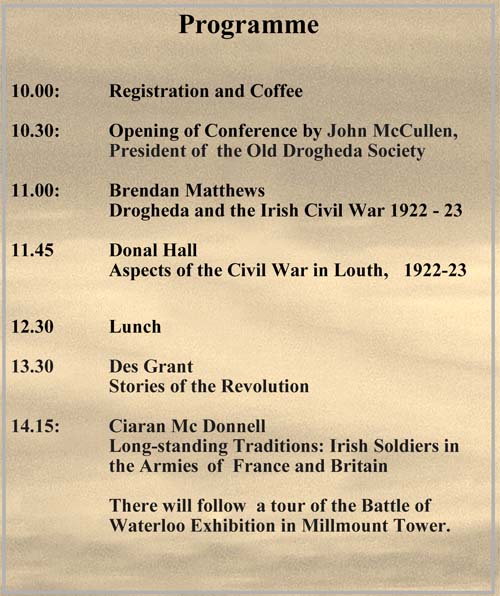