The olde worlde bar at The Glyde Inn in Annagassan.

The Glyde In in Annagassan is fast becoming one of the biggest draws for visitors to the East Coast. Not only is it the quintessential olde worlde Irish pub, but The Glyde Inn is also perched on the edge of the sea from which come many of the ingredients for their prizewinning food.

Conor O’Neill and his staff at The Glyde Inn are no strangers to winning awards and anyone who has visited and sampled their fare will know why. In 2018 they were Pub of the Year and this year they won the gong for Best Food Pub of the year.

Today comes news that The Glyde Inn have featured strongly in John and Sally McKenna’s prestigious guide book listing the finest places to eat, shop and stay in Ireland

“This is a great endorsement for The Glyde Inn's focus on Seafood where most of Louth’s fantastic seafood is found on the menu” said Conor.

In 1991 John and Sally McKenna set off around Ireland to discover what they hoped would be an exciting food culture, and John has written about Irish food ever since.

John McKenna has won numerous awards for his food writing, including a series of Glenfiddich Awards, the Andre Simon Special Award and the Slow Food Ireland Media Award. A long-time writer for the Irish Times, contributor to RTE television and news programmes, John also has written for various international publications, including The Art of Eating. He is regarded as a leading commentator on Irish food. 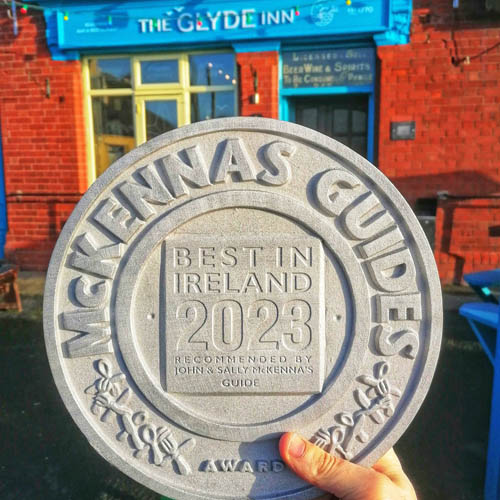 Sally McKenna is a photographer, cookery editor, film-maker and the publisher of the McKennas' Guides, working from her office in West Cork.

She began her writing career with the weekly Irish Independent column Guess Who's Coming To Dinner, and has worked with food since 1991. Sally was the editor and publisher of Pizza Defined by Bernadette O'Shea, and Martin's Fishy Fishy Cookbook, with Martin Shanahan.