The Drogheda pigs that could change the world 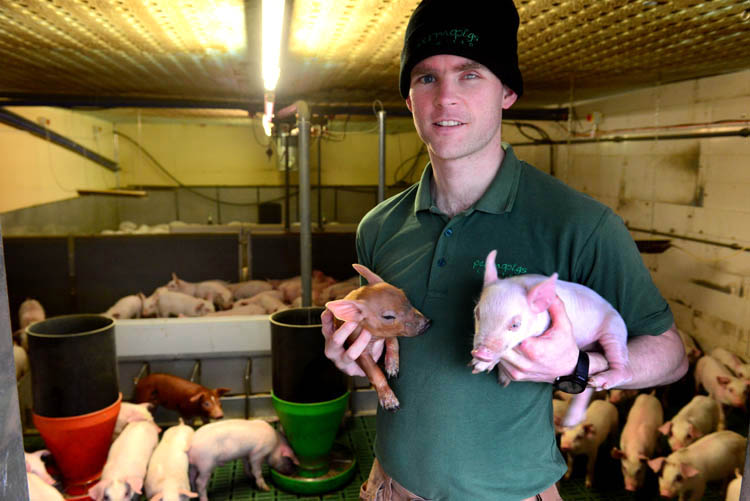 Colin Marry with two piglets on his farm at Littlegrange, just outside Drogheda. Photo: Andy Spearman.

The little piglets pictured above with local farmer Colin Marry are very cute but they are also central to a debate about methods of food production that Colin hopes will lead to a change in attitudes and farming methods.

Colin Marry knows a thing or two about pork and bacon, he runs his own pig farm which turns out some 400 pigs a week. His business, it’s called Permapigs, is just outside Drogheda on the Slane road at Littlegrange in the beautiful Boyne Valley.

The name Permapigs derives from the concept of permaculture which combines the words permanent and agriculture to describe an ethical approach to food production which uses sustainable, eco-friendly systems that work with nature rather than against it.

Colin’s 850 sows and their piglets are housed together in units that are heated to a constant temperature giving them a stress free environment which leads to healthier animals needing less antibiotics.

Colin took over the farm after his father died some years ago and, like all go-ahead entrepreneurs, he’s constantly on the lookout for ways to enhance his business.
This search for diversity has brought Colin to the fore in recent weeks. At the County Louth final of Ireland’s Best Young Entrepreneur (IBYE) competition Colin was the category winner in the Best Business Idea section.

His idea is to open a Visitor Centre at the farm offering “Bacon Tours” which will include talks, tastings and much more besides and will be aimed at a diverse audience from school parties to visiting scientists and general tourists.

Marry (34), thinks it is important to create a conversation around food and how it is produced and it seems that nothing is off the table in this debate.

“Whether they’re vegetarians or meat eaters everyone has to eat” says meat producer Colin.

“People have their own ideas about food and food production that may have been formed on the basis of just one piece of information whereas there could be another 10 pieces of the jigsaw needed before they can get the full picture on which to make an informed decision.”

Colin may have a lifetime’s knowledge of food production but he recognises that there is a disconnect between producers and consumers and this is one of the reasons for his proposed visitor centre which, all going well, will be up and running by the end of this year.

He hopes the centre will provide an immersive experience that will be both enjoyable and interesting but he also wants it to be provocative. The idea is to make people think about their food, where it comes from and how it is produced.

He thinks that Permapigs and the proposed visitor centre will also be ideally placed to become part of a wider Boyne Valley food tourism package along with other local food and drink producers.

The ethos at Permapigs is one of constantly looking for sustainability whether it is in sourcing new ingredients to enhance the flavour of the meat or finding creative and eco-friendly ways of using waste material which, let’s face it, is something that pigs produce a lot of.

Along with researchers in various universities and in Teagasc, Colin is looking at ways to re-use both liquid and solid waste by growing algae which is the second richest form of protein in nature.

On a more down to earth and more palatable level, Colin is also experimenting with ways to add flavour to his pork and bacon products using the permaculture ethos of recycling and re-using wherever possible.

An example of this is that he takes waste products from the rapeseed oil making process of his Boyne Valley neighbours at Newgrange Gold which he feeds to the pigs to enhance the flavour and consistency of the meat.

This idea has in turn led to the development of a new product called Olive Pork which, as the name implies, is pork that comes from pigs that have been fed on a diet that includes olives. The idea came to him in Spain where he found the pork and bacon products to be extremely flavoursome.

This is the first time this has been done in Ireland and he is hoping to supply local restaurants and hotels with the Olive Pork. Already Tuites Butchers in Drogheda, and Georges in Southgate SC are stocking it.

Colin’s efforts to promote innovation in food production have recently been recognised at official level when the Permapigs project was short listed to move to the next stage of the €24 Million European Innovation Partnerships Initiative (EIP) which aims to road test new ideas and practices which can then be used more widely by others to improve productivity, enhance efficiency and pursue sustainable farming practices.

For more about Permapigs see their Facebook Page as their web site is not up and running yet.