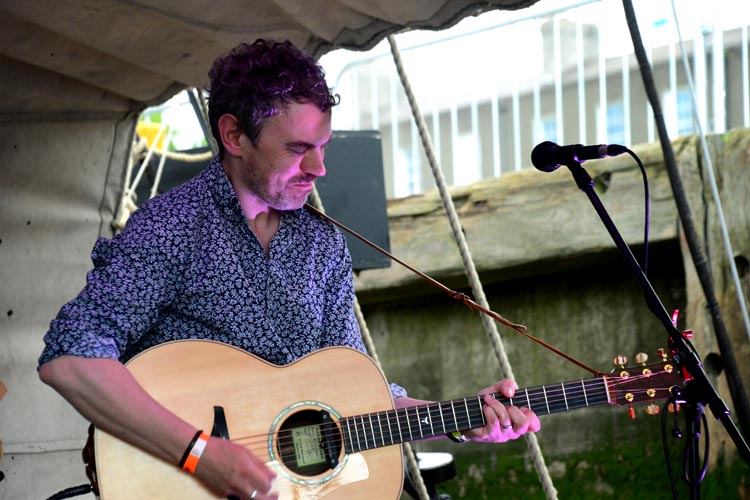 SJ McArdle playing a Stowaway Session on board the Earl of Pembroke sailing ship during the Irish Maritime Festival in 2017. Photo: Andy Spearman.

So, when McArdle was appointed Artist in Association at Droichead Arts Centre it gave him the perfect opportunity to work on an idea he had been turning over in his head for years: a song-cycle based around Drogheda Port.

The Port has been at the epicentre of life in Drogheda for many centuries providing employment and communication.

But a port, by its nature, is also a link to other places. Like the tide, the traffic comes in and it goes out bringing with it tales of adventure and peril on the high seas. In times past Drogheda Port was the point of departure for many thousands of emigrants seeking to escape famine and poverty in this country and a better life in England, Australia or the USA.

SJ has used these poignant stories and also the land-based stories of the port to great effect in this new collection of songs.

SJ’s year-long period of research and writing led initially to a live show but then he and producer Trevor Hutchinson effectively started again from scratch, picking nine songs from the show and stripping them down completely to be reimagined for the album.

Port is produced by Droichead Arts Centre, with funding from the Arts Council and Louth County Council and with sponsorship from Drogheda Port Company. It is a brand new song cycle, full of folk songs, work songs, story songs, love songs to the sea. Songs written in anger and others written in sorrow. Songs about injustice and change. Songs about people.

The Old Ghosts in the Water album was also made with the support of Droichead Arts Centre, Create Louth and the Arts Council Covid-19 Response Award. It features songs from the show with performances from accordion legend Dermot Byrne (Altan, Declan O’Rourke), Dundalk flute player Nuala Kennedy (The Alt) and uilleann piper Brendan McCreanor.

But enough words from me. Please do yourself a favour and play the video below of a song from the album called “All for the Sailing Tomorrow” sung by the wonderful Carol Keogh. For me it is the best new song I’ve heard in many years.

‘Port’ and an “Old Ghosts in the Water” will both be launched on 1st July at The Sugar Club in Dublin.