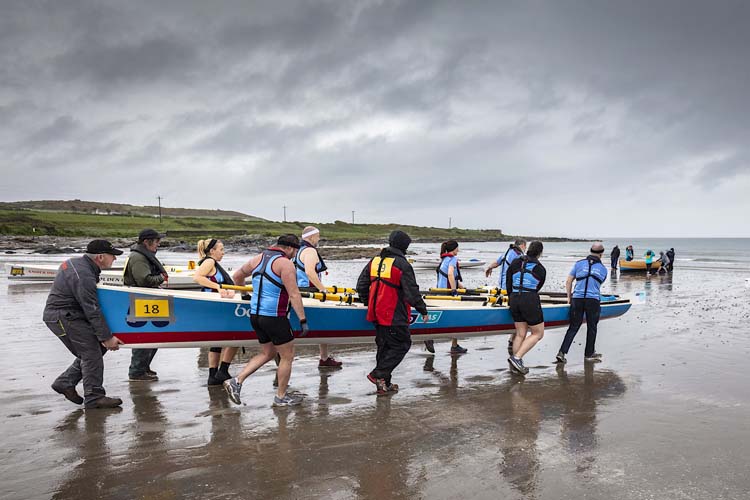 And they’re off - Inver Colpa Men’s and Women’s Crews and Coxes prepare to launch at the beach in Clogherhead prior to the start of the Boyne Boat Race.

From 6.30am on a damp and drizzly Sunday morning May 1st, 29 boats of all shapes and sizes started to arrive on Clogherhead Strand to prepare for the sixth Annual Boyne Boat Race, taking place later that morning.

The race was a huge success with the Inver Colpa Men’s crew not only winning their category, but also taking home the inaugural Cassidy Cup.

Speaking after the event the club Chairperson James McKevitt, who was also a member of the winning men’s crew said:

“The day was a huge success for the club and all involved. The Boyne Boat Race hadn’t been held since 2019 due to Covid, so it was very exciting to bring the event back.

“All the members put in a great effort in organising the race, with special mention going to Grace and her race committee.

“We are also very grateful to the many who made the day possible: Drogheda Port, Boyne Fishermen’s Rescue & Recovery, the RNLI, and the Red Cross. We are also indebted to our sponsors: Flogas, The Mariner, and Grennan’s Bar."

The two Inver Colpa race crews, both men’s and ladies, put in a mammoth effort on the day and in the months leading up to it in training.

The race itself is a real challenge - 15.5km long, starting on the open sea at Clogherhead and then entering the Boyne at Mornington, requiring the cox of each crew to navigate the Boyne into Drogheda, and finish under the De Lacy Bridge at Scotch Hall.

“It was fitting to see so many friends, family and Drogheda folk line the river and quays cheering on the rowers. A true spectacle seeing nearly 30 boats crossing the town waters.

“Even though the route up the river from the mouth of the Boyne is so scenic, passing maiden tower, Baltray, Queensborough, Beaulieu House, and in under the viaduct, all the participants were rowing too hard to notice!

“It is a very special route considering the history of that short stretch of river, following in the wash of St. Patrick, the Vikings, and even the Salmon of Knowledge. Our own Gerry Hodgins is said to be still trying to catch that Salmon!"

This year saw a record number of entrants into the race with crews travelling from as far as Strangford Lough, Ballygally and Whitehead in Northern Ireland, along with crews from Dublin and Wicklow, amongst others. The boats that travelled across the country to compete were a mixture of East Coast skiffs, St Ayles skiffs, currachs, All-Ireland one design boats, Fiesas and Celtic Longboats.

Glenda Carter, Club Secretary and a member of the women’s crew commented:

The weather didn't dampen anyone's spirits on Sunday. It was great to see so many boats on Clogherhead Strand that day after 2 years of not being able to host the race due to the pandemic. We're really proud of the effort put into the race organisation by all our club members and look forward to it being even bigger & better next year!