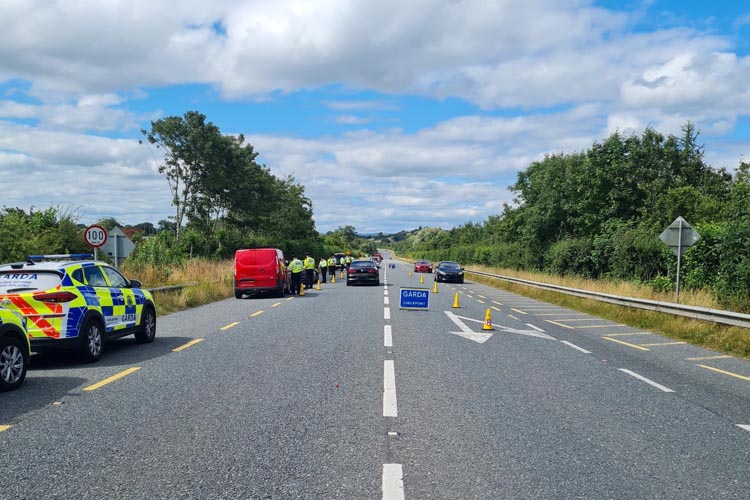 One of the many Garda checkpoints that took place over the August bank holiday weekend.

The Louth checkpoints, were part of a national road safety campaign carried out by An Garda Síochána in conjunction with the RSA, TII and GoSafe.

Across County Louth over 325 drivers were tested for Drugs/Alcohol and a number of cars were also seized for varying offences.

Nationally the campaign included the rollout of a large number of Life Saver measures on our national roads. These included an increase of MIT checkpoints, higher visibility of Gardaí on our roads, and a targeted social media campaign with an aim to raise road safety awareness.

In Cavan Roads Policing units conducted speed checks along the N3. They made several detections of drivers travelling above the speed limit of 100kph. All speeders were issued with Fixed Charge Penalty Notices.

In the Dublin Metropolitan Region, Roads Policing units from Dublin Castle, DMR East, West, South, North Central & South Central conducted a large scale MIT checkpoint on the M50 in conjunction with TII. Two drivers were arrested on suspicion of driving while under the influence.

The days after a bank holiday weekend can see an increased risk for road traffic fatalities and our campaign to reduce road deaths remains ongoing.  An Garda Síochána will this week continue to operate high visibility checkpoints nationally in an effort to save lives.

An Garda Síochána will release detailed data on detections for the August bank holiday weekend in the coming days.