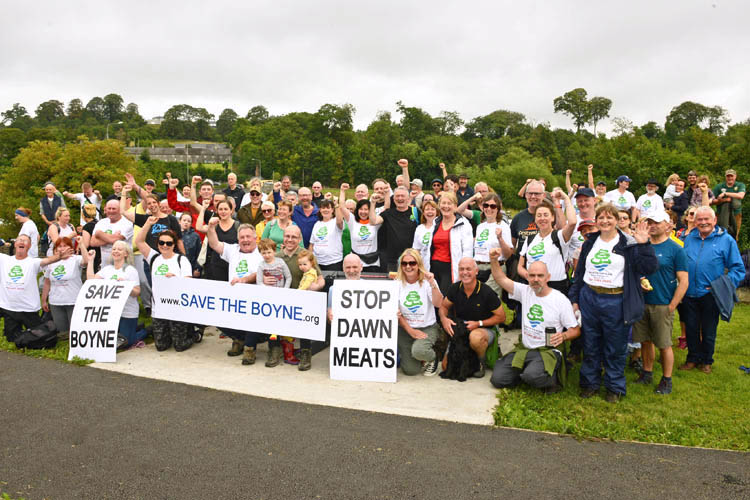 Go with the Flow walkers pictured yesterday at the half way point in their walk from Navan to Drogheda to protest against the permission granted (subject to appeal) to Dawn Meats to dispose of 400,000 litres of treated waste water into the River Boyne.

The second protest against allowing Dawn Meats to pump 400,000 litres of treated waste water daily into the river Boyne took place yesterday (30/07/2022) with a 32 kilometre walk from Navan to Drogheda.

The “Go with the Flow” walk, organised by the Save the Boyne environmental group attracted some 80 or so walkers which was a good turnout considering it was such a big ask – 32 kms is a long walk in anybody’s book.

There is no doubting the group’s sincerity but for a group that has over 9,000 members one would have expected a far bigger turnout and I suspect that if the event had been more accessible it would have been better attended and been more impactful.

Perhaps the group needs to learn from the various farmers groups. They could have camped out in the entrance to Dawn Meats or the Headquarters of Meath County Council until somebody came out to talk to them.

They would certainly have attracted more attention from national media. Because this issue is of national importance.

Going for such long walks is not everyone’s cup of tea and 32 kms is way beyond most people. A public protest in the Centre of Drogheda and Navan and indeed outside Dail Eireann whenever the TDs come back from their holidays might have been more productive.

That said, yesterday was a great success and it was perhaps telling that no government party TDs were in attendance.

Local Labour TD Ged Nash, who had taken part in the previous Save the Boyne walk, was there to see his Labour Party colleagues Mayor of Drogheda Michelle Hall and East Meath Councillor Elaine McGinty off as they joined the walkers for the Slane to Drogheda leg of the walk.

Deputy Nash told Drogheda Life that he and his colleagues were united in their opposition to the “very damaging” proposal from Dawn Meats.

“We are vehement that this proposal will be defeated and I can assure the community that they have our full support on this issue.”

The only other TD or public representative present was Sinn Fein TD for Meath East Darren O’Rourke who is his party’s spokesperson for environment, climate and transport, who said he was delighted to see the large turnout and to be a part of it.

“This application (from Dawn Meats) is offensive to the people in this area and people who appreciate the Boyne and the role it plays in Meath and right across our environment.

“I think a clear message has been sent to An Bord Pleanala today that this project is not supported and the Save the Boyne campaign will continue until they come to their senses.”