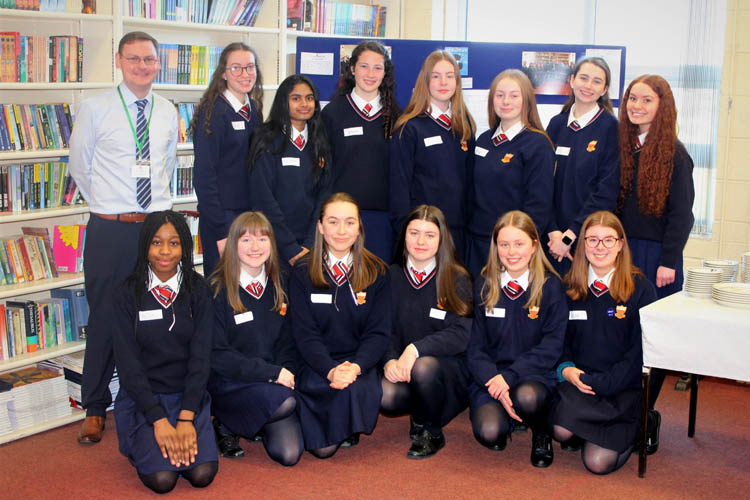 Sacred Heart Secondary School hosted a unique school event on Thursday last, 5th March as part of the Erasmus-funded 'Parallel Histories' programme in which 22 Transition Year students have been learning about, debating and teaching the school's younger students about the contested histories of Israel and Palestine and the conflict between those two countries.

These workshops were a huge success, provoking debate amongst its participants on different aspects of the conflict. Kathy Mullen, from St Fintan's High School stated that her students "were delighted to get the opportunity to look at the Israeli-Palestinian conflict from both sides".

Teacher Brian Whelan outlined the theme of the seminar and stressed that the aim of the talk was to give individuals the opportunity to talk about the different narratives of history, but also its power in developing young minds.

Principal Leoni Carroll outlined her pride at how the programme has turned out, expressing her gratitude to the students involved for all their hard work this year.

Following that, the Erasmus Co-Ordinator, Ms Caroline Ryder, explained exactly what the aim of the 'Parallel Histories' programme was about.

Leah Keogh and Caoilfhionn Sheerin, two of the Erasmus students, took to the podium next to offer an evaluation of the programme so far and went through, in chronological order, the main speakers that have spoken to our students throughout the year, as well as their visits to the American Embassy and Leinster House.

The guest speakers, varied backgrounds included His Excellency, Ambassador Stéphane Crouzat, from the Embassy of France, who spoke about the joint Franco-German history textbook on the 20th Century that was produced for high school students by French and German historians.

He also spoke about the recent French initiative as part of France's chairmanship of the Council of Europe to have an Observatory on History teaching in Europe.

His Excellency, Ambassador Ophir Kariv, from the Embassy of Israel, spoke about differing narratives and perspectives, using the Israeli-Palestinian conflict as a case study.

He was followed by Her Excellency, Dr Jilan Abdalmajid from the Mission of Palestine, who spoke passionately about the history of the State of Palestine and its loss of land over many decades.

Ms Alison Kelly, former Irish Ambassador to Israel, offered her perspective of the theme and specifically mentioned the importance of empowering young women, outlining the achievements this year of our students.

The other guest speakers brought the seminar in a different direction. Dr Eamon Darcy from NUIM, enthralled the guests with his talk on the 1641 Rebellion, while Mr Sean Collins spoke about the history of Drogheda and cross-community links between the Republic of Ireland Northern Ireland.

Mr Tom Reilly entertained the audience with his perspective on Oliver Cromwell and how history has viewed him over the centuries. Mr Dave O’Brien from The Glencree Peace and Reconciliation Centre highlighted the importance of dialogue and learning in any conflict, while Niall O'Keefe from Trocaire offered the humanitarian perspective on conflicts in general.