Round Ireland swimmer stops off in Drogheda 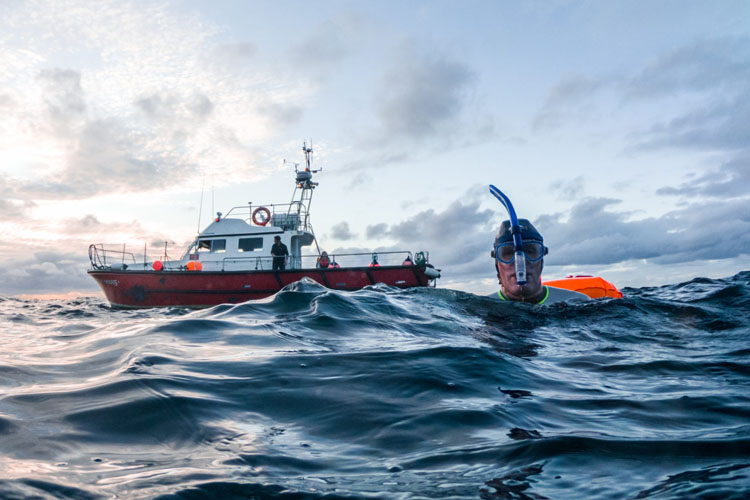 Henry O’Donnell swimming with the Tory Island ferry as his support vessel in the background. Photo: Rory O’Donnell.

“Louth may be the country’s smallest county but its people have the biggest hearts!”

There was an unusual arrival at Drogheda Port this afternoon (Sunday Nov.8) when the Tory Island Ferry moored at the Fiddle Case Pier.

Far from having strayed off course however, the ferry was accompanying Donegal based long distance swimmer Henry O’Donnell who is swimming around the coastline of Ireland to raise funds for two charities, the Irish Cancer Society and Water Safety Ireland.

Henry spent four years training for his epic swim and had originally intended to start next June when the weather would be better and the water warmer but the coronavirus gave him the opportunity in terms of time off, so he just went for it.

He started his swim, it’s called Finswim2020-21, on September 17th when he set out, with his support team aboard the ferry, from Carrickfin Blue Flag Beach in Donegal which will also be the finishing point for the adventure.

This is by no means the first time that Henry, who suffered a life-threatening sports accident in 1992, has dipped his toes into the world of extreme sports as a means of raising funds for charity.

The list of events and expeditions that he has taken part in some of the most extreme terrain, both onshore and in the water including lowest to highest points on four continents, during the last six years alone is incredible. (CLICK HERE FOR DETAILS) https://finswim2020.com/henry-odonnell/

This event is called Finswim2020-21 for a variety of reasons, mainly because Henry is from Carrickfin but also because he uses a variety of different sized swimming fins at different stages of the swim along with goggles and a custom made triathlon suit.

Henry told Drogheda Life today that he learned to swim when he was just four years old and he just loves being in the water. Which is just as well really because he’s currently swimming an average of five hours a day in the open seas.

There is much more to this voyage than swimming however, the average day for Henry and the crew is 12 hours long with very early starts. As well as all the usual safety and navigational issues of guiding a small vessel along a tricky coastline there is also the matter of negotiating the ever-changing currents, the weather and tides to be considered.

Wherever they have overnighted on their trip Henry and the crew have been made very welcome and last night in Clogherhead was no different.

The locals took the Donegal visitors to their hearts and made them very welcome. There was huge surprise for them when the Clogherhead Fishermen filled their fuel tanks with diesel free of charge.

“Louth people may live in the country’s smallest county but they have the biggest hearts!” said Henry who last visited this part of the country to take part in the Fleadh Cheoil in 2019.

He finished by appealing to individuals, businesses and the corporate sector to get behind the charity focused expedition to help by making a donation. You can donate and find out much more information on https://finswim2020.com/