Repairs to loop walk footpaths get go-ahead from Council 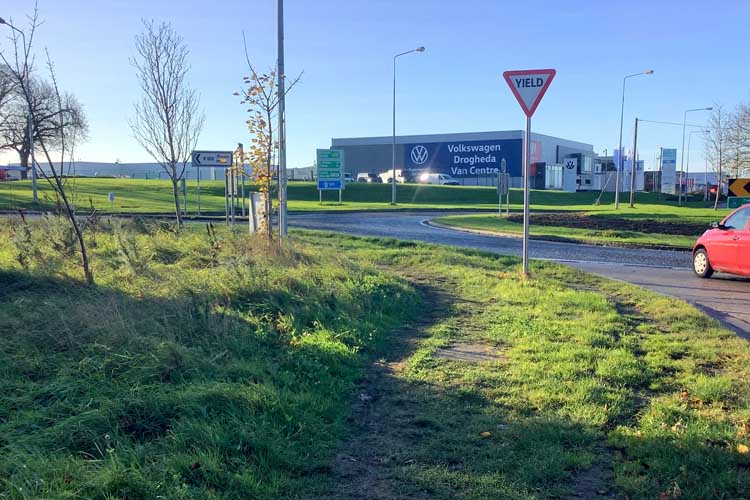 Part of the loop walk showing the obvious need for pavements and cycle lanes.

Tenders for this and four similar schemes in Drogheda being assessed

The popular loop walk from the North Road to the M1 Retail Park and back to Mell is to be repaired and enhanced folllowing representations by Independent Councillor Kevin Callan who raised the issue once again at Monday’s Borough meeting on Monday.

Councillor Callan was informed at the end of last year that the Council had sought funding from The National Transport Agency for the Active Travel Scheme and had been awarded over a half a million euro for Drogheda which will include works on this loop.

Callan said he was delighted to see the progress being made by the Council on what he described as “this incredibly important loop walk”.

He said that it had been used by so many people as a walkway and cycleway during the past number of years and in particular during the pandemic when travel options were limited.

“We must make sure it is safe for people to use and I will continue to work with the Council to ensure we get the project to completion stage” he said.

At Monday’s meeting Councillor Callan raised a notice of motion calling for works to be carried out and also requested measures be put in place before the main project gets underway.

Responding, Infrastructure Director Frank Pentony noted Cllr Callan’s points, in particular the issue of safety for pedestrians around the Hill of Rath roundabout.

The council responded to Cllr Callan’s motion by saying that the process will involve the contract being awarded this month and feasibility stage proceeding in the coming weeks.

In his response Mr. Pentony said that the  scheme will involve provision of footpaths and cycle lanes over c 2.25 km on both the R168 from Leonards Cross to the Hill of Rath Roundabout and the R166 Northern Cross Route from the Hill o f Rath raoundabout to the Rosehall Roundabout.

He added that tenders for planning and design consultants for this and four other schemes in Drogheda are currently being assessed.