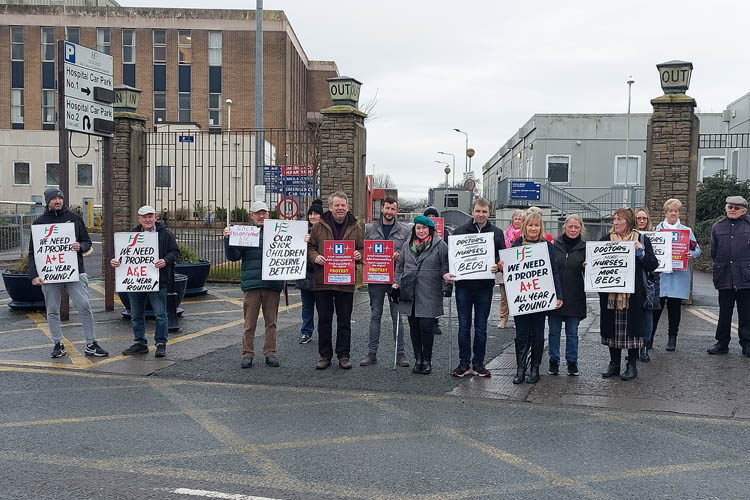 Yesterday's protest at Our Lady of Lourdes Hospital.

Perhaps it was due to the lack of prior publicity but only about two dozen people gathered outside Our Lady of Lourdes Hospital yesterday (Saturday, January 20) as part of a national campaign to highlight the ongoing A&E crisis in the country.

Speaking at the event Michael O'Dowd,  spokesperson for the Drogheda  Hospital Campaign said the figure of 123,000 people waiting on trolleys last year was a disgrace and was equivalent to the population of Louth.

“Most severely affected” , he said, “were the elderly who have adverse outcomes  with prolonged stay on trolleys including confusion, early onset of muscle mass deterioration and incontinence.

“It's tragic that is allowed to continue while the state is awash with tax revenues” he said.
Also speaking at the protest were Sinn Fein Deputies Imelda Munster and  Ruairí Ó Murchú.

Michael O'Dowd also highlighted the fact that a petition had been drawn up to seek 'world class' A&E facilities for Drogheda given its growing population and said that to date some 400 people had signed it.