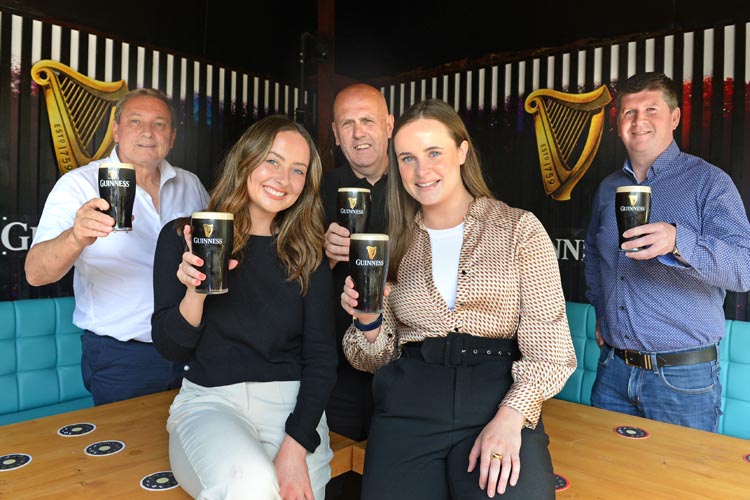 There are some things though that you just can’t plan for in this country and one of those is sunshine – thankfully yesterday was the hottest day so far this year and what a day to launch your revamped beer garden.

That was the case yesterday as Gleeson’s unveiled their new look beer garden thanks to Diageo Ireland.

Right up to the last minute proprietor Brian Browning was rushing around checking that everything was just right. He soon calmed down though, it was just too hot for rushing and soon the pints were flowing and the staff turned out in style.

“It’s been hard work but it is an amazing transformation” Brian said. “Gleesons now has a beer garden that certainly will to compete as the top beer garden in the country”, he added.

“This is our third revamp of our venues with the support of Diageo and there’s no doubt that the punters will be flocking to this venue this summer” he said.

Emily Flanagan, Customer Activation manager with Diageo was on hand to oversee the launch and she seemed quite excited with the outcome.

“After three months on the planning board there is no doubt that the end results has shown our commitment to Brian and all his team at Gleesons” has been worthwhile” Emily said.

“This is the first beer garden in Ireland to be completed as part of our strategic fund of €2m which will used to roll out several re vamped beer gardens under the Guinness Brand this year” she said.

So another exciting venue to visit this summer in Drogheda with a great music line up and a great team to host you.....check it out you won’t be disappointed!

Keep up with what’s happening at Gleesons on their Facebook page - https://www.facebook.com/gleesonsdrogheda/