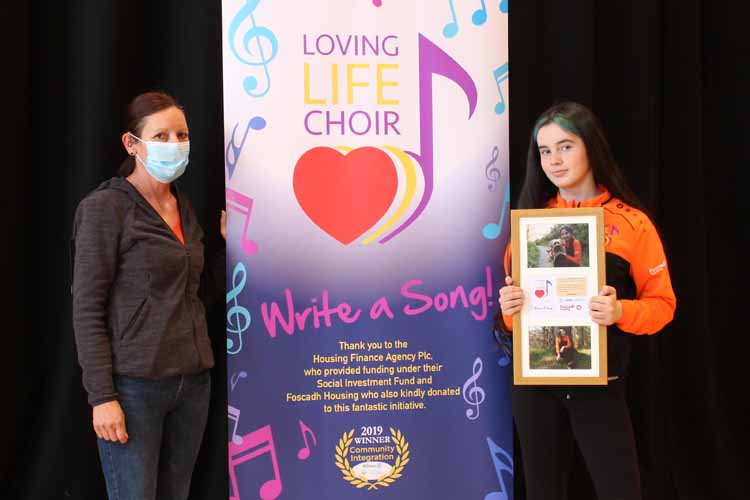 A youth choir that was established in May 2019 in response to the effect the gangland violence was having on children in the Moneymore area of Drogheda has been shortlisted for an award in the Irish Council for Social Housing Community Housing Awards 2021.

Members of the Loving Life Choir wrote and recorded their very own lockdown song call ‘Another Day’ and it is the first time a song has been entered into the prestigious Housing Awards.

You might well ask why a song should be entered into a housing awards but the CEO of the Foscadh Housing Association, Ken Ó Heiligh knows only too well that creating a community means far more than just building houses.

Foscadh is the Irish word for shelter and yes, they do build accessible and affordable social housing, but for Ken that is just the beginning.

“It’s not just about blocks and mortar” Ken said. “It’s far more than that.” In his eyes supporting and strengthening communities is just as important.

Ken told Drogheda Life that following a particularly brutal and violent series of events in the Drogheda feud, much of which took place in the Moneymore area, he heard some of the local children talking about shootings and burnings in a nonchalant, almost matter of fact way and decided that  it was time to change the conversation.

When he asked them what they would like to do he was surprised when the children came back to him to say they’d like to sing. And so the Loving Life Choir was born.

Things got off to a shaky enough start because, while the new choir had plenty of raw talent, there was nowhere for them to rehearse and hone that talent into a functioning choir. Their first practice space was a marquee on the green it soon became evident that they needed somewhere more suitable and eventually they got a room in DIFE where they could practice.

They had their performing debut in December 2019 at Scotch Hall as part of the Drogheda Christmas Festival where they were very well received. Emboldened by their success they then set their sights on performing at the 2020 Saint Patrick’s Day parade.

Ken suggested they should sing “Hail Glorious Saint Patrick” but not one of them had ever heard of it let alone able to sing it. Undaunted though, they all learned the words off and set about practicing to sing it together.

And then Covid-19 struck and on March the 15th, just two days ahead of Saint Patrick’s Day and the choir members had got their heads around “Hail Glorious Saint Patrick”, the parade was cancelled.

The children tried to keep some semblance of normality during lockdown and kept practicing as best they could, either on Zoom or in open spaces around the estate.

They needed a goal to aim for and they decided they would record a video but, due to Covid restrictions they had to record each voice separately in a temporary studio that was set up in the Foscadh board room.

In July last year they released their first video, their version of a song called “What About Us”, by the American singer/songwriter Pink.

In September last year Ken convinced the Housing Finance Agency to fund the choir to write and produce a song about their experiences under Covid-19 lockdown.

With plenty of guidance and with sessions conducted over Zoom and other online apps, choir members chose their favourite chord progressions, rhythms and instrumentation, developed lyrics and even took part in a competition to create an artist’s impression of the song’s fictional character, Mary Rose, to bring her lockdown story to life.

“Another Day” will be launched to the public very soon but in the meantime they are looking for your vote.

From hundreds of entries from around the country, the Loving Life Choir is one of just 30 entries to make it through to the final of the competition. The winner will be decided by public vote.

Voting is open now and closes at midnight on Monday next, September 13th

CLICK HERE TO VOTE NOW – BEFORE YOU FORGET! (scroll down until you see the Loving Life Choir entry)