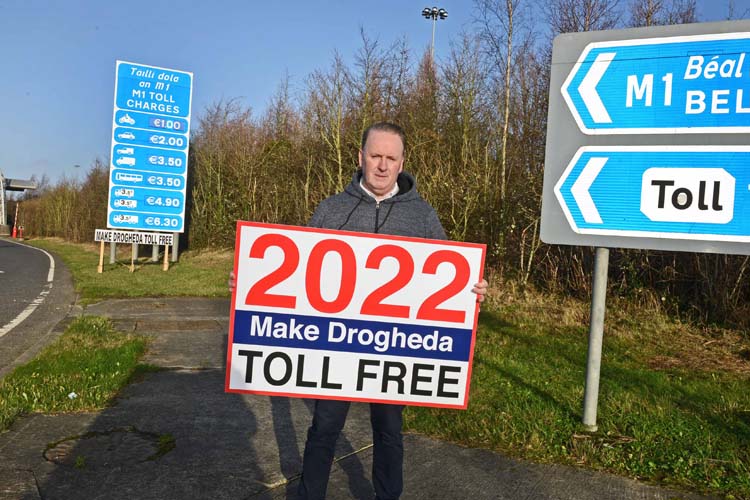 Ken O Heiligh pictured on January 2nd this year - the 18th time he has protested at the M1 toll booth at Junction 9, Drogheda.

Despite calls from local politicians of all parties to have them removed altogether, Transport Infrastructure Ireland (TII) has announced that, far from removing them, toll rates across the national road network will in fact be increased from January 1st 2023.

The much loathed tolls on the M1 at Drogheda have been adding to the traffic chaos in the town for years as drivers, especially HGV drivers choose to travel through the ton rather than pay the exorbitant toll.

For almost 18 years now, the Make Drogheda Toll Free campaign, spearheaded by former Drogheda Councillor Ken O Heiligh, has lobbied at local and national level for the past 19 years to abolish the strangle hold that these secondary tolls have on our town.

Each year on New Year’s Day Mr. O Heiligh and other concerned citizens have taken the Make Drogheda Toll Free Campaign into the public domain by mounting a protest at the junction 9 toll gate on the Donore Road.

He says that, at the very least, TII should consider removing the toll for HGVs to help relieve the traffic chaos in Drogheda which he says will only get worse until the Northern Access Route is finally built.

"The ever increasing Drogheda tolls will force additional commuter traffic to actively avoid the tolls" he said.

"I am calling on the state to buy out the remaining eleven years on the Drogheda toll contract and bring an end to the daily traffic congestion in our town.

The Drogheda Tolls continue to have a negative impact on commuters who are struggling with excessive cost of living demands. On a daily basis we are forced to deal with tailbacks and long delays in and around our town."

Local Sinn Féin TD Imelda Munster has slammed the latest increase describing it as “an unfair tax increase on the town”.

“As the effects of the cost-of-living crisis are felt more and more by every citizen and resident of Drogheda, this inexcusable increase couldn’t have come at a worse time” she said.

“We know the toll operators have previously made profits year on year and we know that they have also received significant state funding to ensure they retain profitability.

But, she says she cannot see any justification for this further increase in toll prices and has contacted Minister Ryan asking that this latest price increase be scrapped.

“The toll plaza at the retail park to cross the town is rarely manned. There hasn’t been any significant road works on the stretch of the M1 that the toll operator is responsible for.

“This toll increase will cause further and worse traffic congestion in Drogheda as hauliers in large trucks and commuters alike will divert into the town to avoid the toll.

“Drogheda’s traffic problems are at an all time high. Every resident can attest to the fact that it is taking longer and longer to get anywhere in the town, especially if you want to cross the bridges to the other side.

“The only fair outcome for Drogheda will be for the M1 toll to be gone forever.”

The toll charges on the M1 from January will be:

Click here for full details of the new tolls on the Port Tunnel, M50 and other motorways