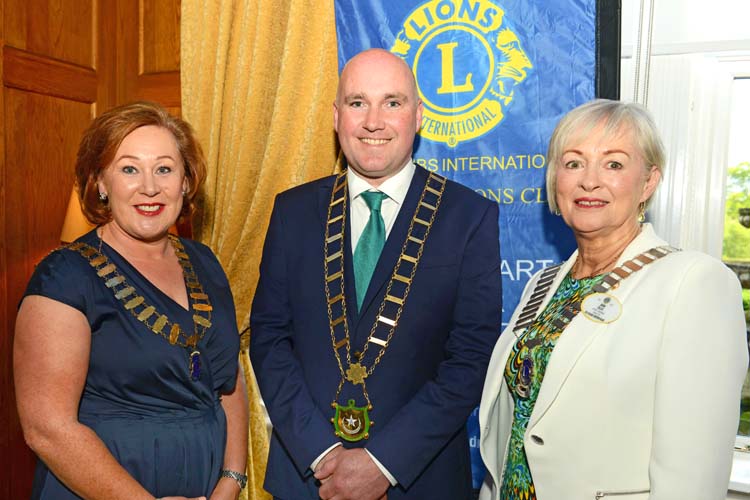 Drogheda Lions Club members gathered in Scholars Townhouse Hotel on Friday evening last for their annual President’s Dinner and to introduce the incoming President and their new, all-female committee.

This is the event each year that the chains of office are officially handed from the outgoing to the incoming President.

This year’s incoming President is Marian Agrios who heads an all-female committee to guide the club forward during the next twelve months.

Incoming president, Marian Agrios, welcomed all the members to their annual dinner and extended a special welcome to Ann Ellis, District Governor Lions Clubs of Ireland.

The club’s work in the community was celebrated and remembered with a display of past newspaper articles, pictures and other memorabilia.

The contribution of longstanding supporters, such as Dr. Seamus Keenan, Donal Browning and the McGowan family of Scholars Townhouse Hotel was highlighted together with the contribution of their late colleague Jacintha McIvor.

They kicked off this year with Rock and Roll Bingo, an International Peace Poster Competition for primary schools, a party for Drogheda Women’s Refuge, Trishaw trips and continued their fundraising with a recent golf classic.

The Club is looking forward to relaunching its annual Tea Party in conjunction with Active Aging week in early October, and an in-store food collection is back on the cards for this Christmas.

Drogheda Lions Club was first launched at the Boyne Valley Hotel on 19 February 1971. The first club president was Donal Myles supported by Michael Mary Smyth, Secretary, Dr Peter Neary, Treasurer and Mr. Michael Donnelly, PRO. Apart from a few years when it was disbanded, Drogheda Lions Club has served the local community since.