Hall is elected Mayor of Drogheda – Callan is her Deputy 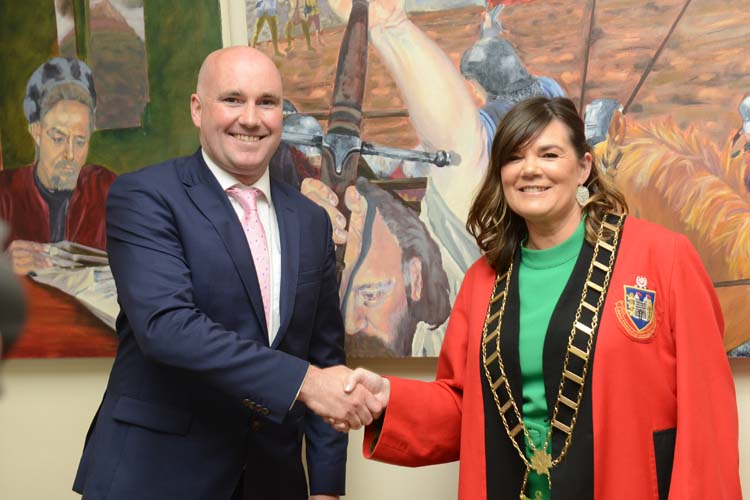 The new Maor of Drogheda, Councillor Michelle Hall receives the chains of office from her predecessor, Councillor James Byrne.

For only the second time in almost 800 years, Drogheda has a female Mayor.

Earlier this evening Labour Councillor Michelle Hall was voted into the position by a majority of the members of the Borough District of Drogheda Annual Meeting having been nominated for the position by the outgoing Mayor, Councillor James Byrne.

The only other nomination was for another woman, Sinn Féin Councillor Joanna Byrne, who was nominated by her party colleague Councillor Thomas Cunningham.

Accepting the position Mayor Hall admitted to being “a bit overwhelmed” by the trust placed in her but said it was an absolute honour to accept.

She thanked the outgoing Mayor who, she said, didn’t get the term of office that he would have wanted due to Covid.

She had some special words of thanks for her Labour Party colleagues in Drogheda who were there in numbers. “I am lucky to part of a vibrant Labour Party in Drogheda” she said.

“It’s 792 years since the first Mayor was elected in Drogheda and all of them were men until 2003 when Maria Campbell O’Brien changed that narrative.”

The new Mayor said that it was a shame that she should start her term of office on the day that Drogheda was classified as one of Ireland’s dirtiest towns coming come 39th out of 40 in the latest IBAL Anti-Litter League.

She said that, among other issues she would be concentrating on tidiness and our local environment and work towards getting Drogheda recognised as a destination town.

“When a place looks clean and tidy it promotes a feeling of belonging and safety” she said. “I will continue to support the Drogheda Tidy Towns Committee and would like to see more members of the public getting involved.”

One of the first Councillors to their feet was Councillor Joanna Byrne who had been nominated by fellow Sinn Fein Councillor Thomas Cunningham for the Mayorship but had once again been defeated by the voting pact between the other parties.

“I am delighted to see a female colleague taking the position of Mayor” she said. “This is a very positive day for Drogheda with a female leader and I wish Councillor Hall the very best of luck.”

The next business on the agenda of the meeting was to elect a Deputy Mayor was the election of a Deputy Mayor and once again there were only two nominations – outgoing Deputy Mayor Declan Power nominated Kevin Callan and Joanna Byrne proposed her Sinn Féin colleague Councillor Thomas Cunningham.

The voting followed a similar pattern and Councillor Kevin Callan was duly elected as Deputy Mayor.