Government has ignored Drogheda for too long, we need action

Drogheda on the Boyne, at a bit of a low ebb due to lack of funding. Photo: Andy Spearman.

There’s no denying it, Drogheda is being ignored by central government and has been for decades.

When Tanaiste Leo Varadkar said last week during a flying visit to Drogheda that the Port Access Northern Cross Route (PANCR) “sounds feasible” to him, it just proved how much out of touch he and his colleagues in the cabinet really are.

Of course it’s feasible Leo and you can tell that to Micheal and Paschal and Darragh and the rest of the gang in around the big table when you see them next, it has been feasible for the best part of twenty years since it was first mooted for goodness sake.

Not only is it feasible it is also essential to the future development of this ancient and noble town. It is simply not good enough that the needs of the people of Ireland’s largest town go unfulfilled and their calls for help fall on deaf ears.

We need houses Leo, plenty of them, we need jobs and we need 21st century infrastructure both for work and for leisure.

In their so-called National Development Plan the government mentioned Drogheda just once and that was in an airy-fairy sort of commitment to extend the DART to Drogheda.

This in itself is an indication of the Government mind-set, they see Drogheda as a dormitory town supplying workers to the capital each day. Where is the vision or the ambition?

Why aren’t they pushing Drogheda as a place for new businesses to establish? A place that has facilities that make it conducive to family life and where, unlike Dublin, you don’t have to pay a king’s ransom for a workman’s cottage in which to live

Why can’t they see the extended DART, if it ever happens, as a means of transporting people from Dublin to jobs in new companies in Drogheda? Dublin is already choked for goodness sake.

As Anna McKenna of the Drogheda City Status Group said last week, there is growing frustration at the lack of jobs available locally and many locals are in dread of going back to the treadmill of long commutes to the city that keeps them away from family, as well as local sports and social activities.

The Geiran Report is perhaps the bright light on the horizon which may be the dawning of a new era but there is a long way to go before we see much progress unless the Government puts its shoulders to the wheel.

The report indicates major challenges for Drogheda to address in areas of poverty and deprivation and we can only hope that appointing Michael Keogh to oversee the implementation of the plan’s multiple recommendations is not just a handwashing exercise.

That is perhaps too cynical but Mr. Keogh has his work cut out for him negotiating with the various government departments. I don’t envy him his task but he is a career public servant and no doubt has an insight into how these people operate.

“Job creation is ‘the medicine of prosperity’ and is a critical factor to give those less fortunate in our communities ‘a hand up’  says Anna in her statement. 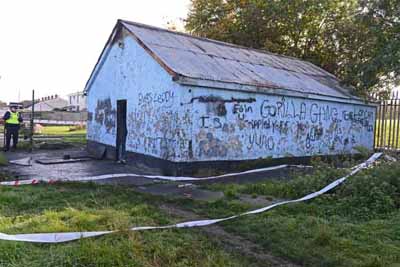 For me, the picture (above) published yesterday of the Burned out Drogheda Boys and Girls Football Club’s changing rooms epitomises the low ebb to which Drogheda has sunk.

Yes it is disgraceful that such a facility should be vandalised but it is equally disgraceful that a club catering for upwards of 400 members that is supplying such a badly needed outlet for young people in one of the most deprived areas of the town should have to soldier on for years in such a dilapidated building without help from the authorities.

The Government has ignored Drogheda for far too long, it is time they stopped starving the County Council of funds so that local communities can start building themselves up again after years of shocking neglect which has created a vacuum which spawned all manner of miscreants.

I’ll let Anna have the last word when she says: “The PANCR is all about homes and jobs and Louth Co. Council has already spent millions on planning and developing it...it is impossible to understand why it is not being urgently progressed and that National and Local Government chose to bypass it.”