Francis Ledwidge remembered 105 years after his death in WW1 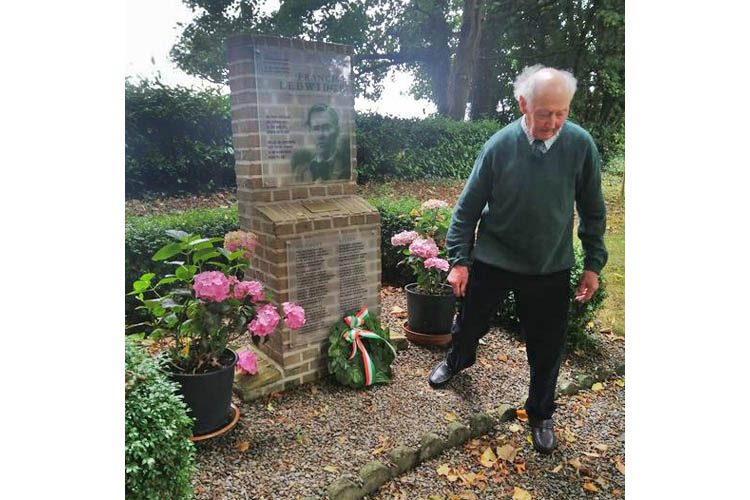 The Honorary President of the Ledwidge Museum committee, Jimmy McComeskey, laid a commemorative wreath at the monument to the poet in the museum garden.

Members of the Ledwidge Museum Committee gathered at the museum garden in Slane on Sunday for a ceremony to mark the 105th anniversary of the death of the local poet Francis Ledwidge.

Ledwidge was killed with several of his British Army comrades at Pilckem Ridge near Boesinge, Belgium on 31st July 1917 during the First World War.

Welcoming those in attendance for the ceremony, the committee Chairperson Terry Wogan said he was always struck on these occasions by the contrast of the peace and tranquillity of the museum garden with the terror and tumult of the battlefields of World War 1 where the poet paid the ultimate sacrifice during the battle of Ypres. 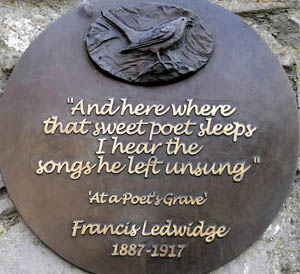 This year marks the 40th anniversary of the opening of the museum and the chairperson paid tribute to all former committee members who had the vision and foresight to come together to acquire the poet’s home place and open a museum dedicated to the life and works of Francis Ledwidge and celebrate the built and cultural heritage of County Meath.

The Honorary President of the Ledwidge Museum committee, Jimmy McComeskey, laid a commemorative wreath at the monument to the poet in the museum garden with the citation (From The Fallen by Laurence Binyon):

“They shall not grow old, as we that are left grow old, Age shall not weary them, nor the years condemn, At the going down of the sun, and in the morning, We shall remember them”.

He spoke of how Ledwidge was inspired by nature and captured the natural beauty of his surroundings and spoke about the wonderful views visible from the museum, from Stanley Hill to Crocknaharna, images so well captured by Francis Ledwidge in his poetry.

A minute’s silence was observed to remember Francis and all who lost their lives in World War 1 and the ceremony concluded with readings from the poet’s work by James Doherty and Paul Murphy. 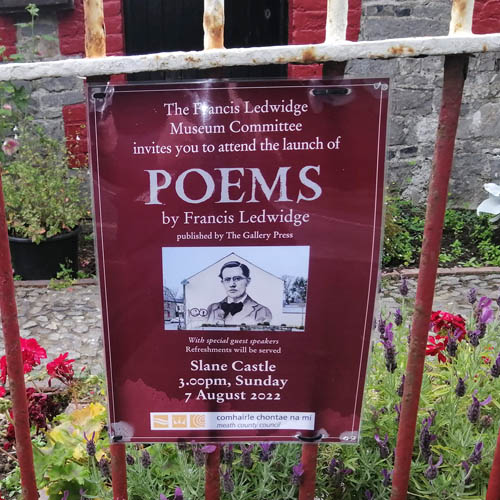