Trevor and Geoffrey Leech present Tanya O’Flaherty from Millmount Museum with the sash that was placed over the body of their great granduncle as he was receiving the last rites after being shot at Pitcher Hill, Drogheda on June 29th 1922. On right is family friend Councillor Paddy McQuillan. Photo: Andy Spearman.

A hundred years ago today a 17-year-old Drogheda IRA volunteer called Liam Leech was shot dead by a pro treaty sniper as he took part along with his comrade in arms Harry Fairtlough in his first engagement with the IRA against during the storming of Millmount.

Today, members of his family and friends placed wreaths at the spot on Pitcher Hill where Leech, a member of the first Battallion of the 9th Brigade of the IRA, died.

Brothers Trevor and Geoffrey Leech also presented Millmount Museum with a special sash that was placed over the body of their great granduncle as he was receiving the last rites from a local priest.

Geoffrey Leech told Drogheda Life that the sash had been left to his grandfather James Leech and has been in the family for many years. 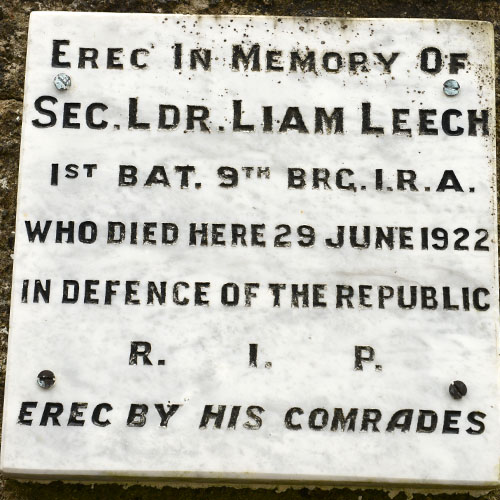 “We have wondered what to do with the sash and eventually decided that the sash is part of the history of Drogheda as well as our family and the best thing was to gift it to the museum” he said.

Councillor Paddy McQuillan, a lifelong friend of the Leech family, described their gesture as an unbelievably generous donation which was made all the more poignant by the day that was in it.

“This artefact donated today to Millmount Museum by the Leech family will stand proudly alongside all the other artefacts in the museum which depict the rich history of our town.”