A few of the many thousands of people who took part in Dublin Pride on Saturday last. Photo: Andy Spearman.

Saturday was a special day for my wife Jenny and I, not everything went to plan but as the day progressed I found myself becoming more and more proud of being Irish.

Because I am of a certain age I can travel anywhere in the country by train or bus for free. That is something that very few other countries offer their senior citizens, it certainly doesn’t happen in the UK.

Jenny and I had planned to meet up with my daughter Sally and her partner Eddie to watch the Dublin Pride parade, from there to the Gate Theatre followed by an early dinner.

First of all the theatre rang to say the show, the Tin Soldier, had been cancelled due to illness. We tried to book tickets to the Kilmainham Gaol museum but that was booked out and then shortly after the train had set out from Drogheda Sally rang to say they couldn’t join us because Eddie had tested positive for Covid.

The train journey down to Dublin got livelier the closer we got to the capital with people in VERY colourful clothes and in great spirits chatting away to each other – something else that doesn’t happen on English trains.

At every stop along the route the carriage became more crowded and the laughter got louder so that when we all alighted at Connolly station the platform was like a river of colourful people and happy sounds.

We had timed our arrival to perfection because five minutes later we were cheering as the Pride Parade made its way past the Customs House and across the Liffey on their way to Merrion Square.

Such a wonderful sight and atmosphere is difficult to describe but it made me proud of our nation, gay members and straight, to see such outpourings of love and happiness.

Yes there is still homophobia and there have been homophobic attacks in Ireland recently but thankfully the vast majority of the Irish population is proud that we as a nation have grown up and understand and enjoy the fact that we are all different and that difference is respected.

I started secondary school in the early sixties in Dublin and I remember one boy, a year or two older than me, being bullied unmercifully because he was different to all the other 600 or so boys in the school.

As it turned out I am heterosexual but on Saturday when I saw, on a couple of occasions, young men walking hand in hand and young women embracing it made me think about how far we have come as a society.

The whole of Dublin seemed to be in good form on Saturday even the intermittent rain that Met Éireann had forecast didn’t dampen their spirits and there was an amazingly positive atmosphere.

At one stage I saw the Army band playing across Merrion Street from the eternal flame monument but they couldn’t compete with the cacophony of sound being made by the Pride people. 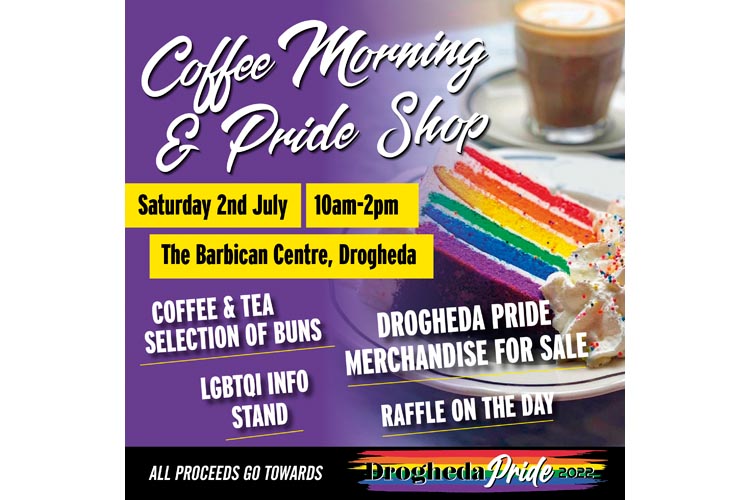 I’m now looking forward to the Drogheda Pride and wish the organisers the very best of luck.

They’re promising lots of amazing baked goods from their friend's in Bunz. There’ll be a photo booth, Pop up information and advice stand for parents or guardians

Oh, and tea coffee and refreshments and a raffle. Also a Pride Shop where you can pick up some of your amazing pride accessories for the big day in Drogheda. For more information visit Drogheda Pride on Facebook or  Instagram @droghedapride.