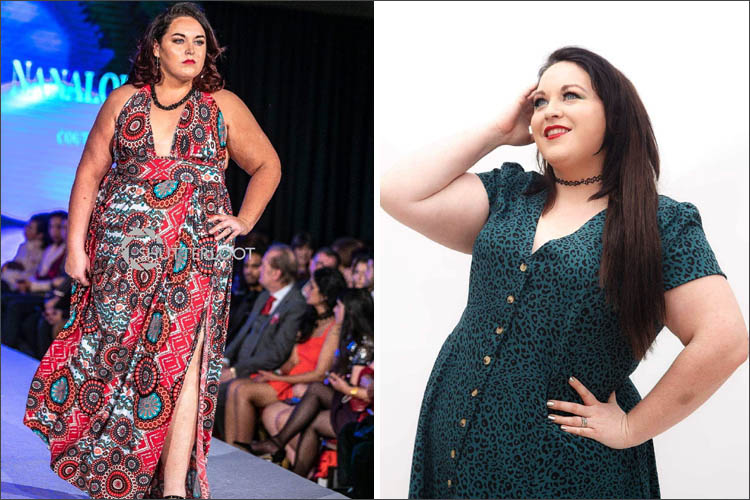 Drogheda’s Queen of the curves Rhian Thompson is just back from appearing on the catwalks of London fashion week.

Rhian is a freelance plus-size model who is on something of a mission to promote body positivity in the world of fashion. Originally from Wales, she lives in Drogheda and works with a collaborative of similar size models known as Celtic Curves.

She has featured on Drogheda Life before when she was crowned “Miss Curves Ireland” for 2017/2018 and she has been busy ever since but this was her first time at London Fashion Week.

“It was incredibly exciting!” she said. “I was modelling couture so the clothes were all made for me!

“I like to break with tradition and last week I was one of the first plus-size models to be used in London Fashion Week.

“Myself, along with fellow Celtic Curves’ Nicole and other Irish plus-size models Sinead and Theresa stepped out modelling Nana Lola Couture in House of ikons at London fashion week.

“It was an honour and we hope that shows change and that London Fashion Week will start using different body shapes in their mix.

“I am also going to compete internationally in a pageant later this year! In fact I am doing a few pageants this year. It is shaping up to be a very exciting year for me!

Rhian is competing in the Galaxy pageant this year and is currently Mrs Galaxy Louth finalist.

“This is a huge honour as it's such a prestigious event” she told Drogheda Life. “You don't often see plus size girls enter Galaxy pageants as it does not have a curves category so it is a big change for me.

“I have won a few pageants in the past. Miss Curves Ireland and Miss Supreme Beauty of the Golden Globe curves but they both have plus size categories.

“This is the first time I am competing without that safety net. But I wanted to represent the plus size and will be doing the bikini round.

When we spoke to her last year Rhian said: “It is becoming more OK to be curvy. The national average is 16-18 so it's ridiculous to expect everyone to be a size 6. Being something other than the “perfect” figure is fine.