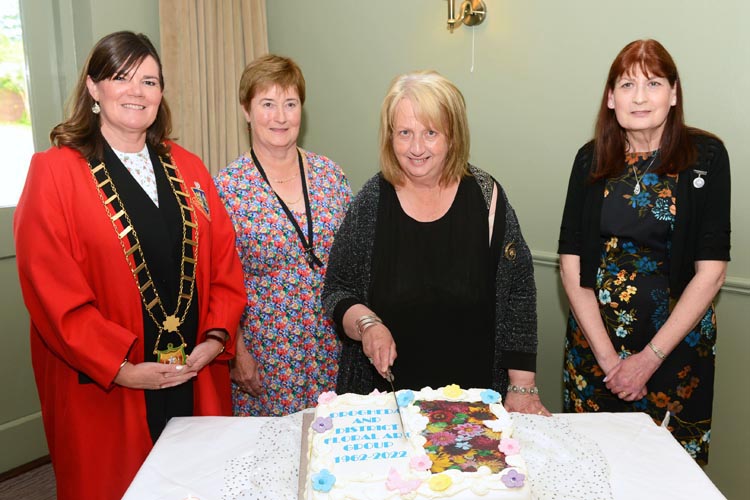 Elizabeth Hoey, Vice Chair of the Drogheda and District Floral Art Group, cuts the cake at the group’s 60th anniversary party in the Glenside Hotel. Looking on are (from left): the new Mayor of Drogheda Michelle Hall on her first official engagement since being elected, Ann Clifford the Vice chair and Elizabeth Murray Treasurer, of the Association of Irish Flower Arrangers. Photo: Andy Spearman.

The Drogheda and District Floral Art Group-affectionately known as the ‘Flower Club’ - celebrated its Diamond Jubilee on Tuesday night with a special dinner at the Glenside Hotel.

Almost 100 Members, guests and friends gathered for the anniversary meal, with Club Vice-President, Elizabeth Hoey, from Beamore, acting as hostess for the night.

The newly-elected Mayor of Drogheda, Michelle Hall, who had only taken up office on the previous night, was attending her first civic function, which was a great honour for the Flower Club members.

A giant birthday cake presented a colourful back-drop for the invited guests, and Elizabeth was very proud to cut the cake on behalf of the Club’s 60 years of floral design and enjoyment.

Following an excellent four-course meal, Elizabeth then gave a wonderful address outlining the history of the Club and her own journey of ‘Friendship through Flowers’.

The Club is affiliated to the Association of Irish Flower Arrangers (AOIFA), and the AOIFA Vice-Chairman, Anne Clifford, congratulated the Club on its illustrious history.

Mayor Hall then spoke movingly of her family’s association with the Flower Club in a superb address delivered with grace and charm to her rapt audience.

Following the speeches, Christopher White from the Naul Gardening and Flower Club, presented a wonderful demonstration of the finest examples of floral art, incorporating his international skills into the creation of eighteen beautiful arrangements.

Christopher is a Gold Medal winner at Chelsea Flower Show and a multiple Gold Medallist at Bloom, and has demonstrated at many venues all over the British Isles. He joined the Drogheda Club at 18 and has returned every year to demonstrate with his flamboyant array of arrangements on each occasion.

Christopher’s were the prizes for a much-anticipated raffle after the demonstration, and eighteen happy members went home with one of his creations under their arms. A separate raffle saw the lovely coincidence of a superb pedestal arrangement, created by Mary Bell-Ryan of Forever Flowers, being won by a delighted Virginia Dineikiene from Southgate Florist!

The Club was founded on Mid-Sumer’s Day in 1962 in the Gate Club, Trinity Street, by a group of strong women (with one man), one of whose grand-daughter, Lucita Shorter, is currently an active member of the Club., which has flourished with Spring and Autumn demonstration schedules, Gala Nights and many Day Trips since then.

Everyone was treated to a coloured commemorative brochure, outlining the 60 year-old history of the Club, its highlights and successes, charitable causes, and a list of its Presidents (with one man) since its inception. It was a memorable night for a wonderful Club.