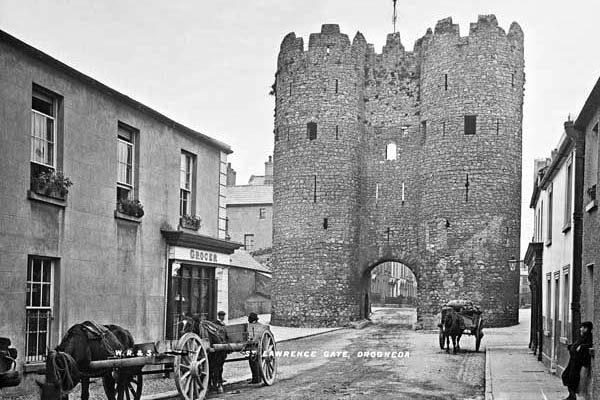 Laurence's Gate has played a significant role in the history of Drogheda and is set to play just as big a role in it's future as tourist destination town.

Laurence's Gate and of course our other historic buildings have played a significant role in the history of Drogheda and are set to play just as big a role in it's future following an announcement this morning by Fáilte Ireland that Drogheda is to be allocated significant funding to develop its potential as a tourism destination town.

The exact allocation has yet to be finalised but is thought be in the region of €500,000 and it was allocated through Louth County Council as part of the €15.5million ‘Destination Towns’ initiative launched earlier this year.

Ms Morrissey told Drogheda Life that the project, it’s called ‘Linking the Historic Features’ will be focused on two axes through the town, one going North- South from Magdalene Tower to Millmount and another going from West to East from the Old Abbey to Laurence’s Gate.

They will tell three underlying stories and themes relating to Drogheda – the Old Town Walls, the two Olivers (Cromwell and Plunkett) and the historic architecture of the town.

The idea is to lead visitors along the two axes with ground level interpretation panels and signage at regular intervals along the way. These plans are on view at the Council offices in Fair Street and also on line at https://www.louthcoco.ie/en/louth_county_council/general_notices/part-8-notice-drogheda-visitor-signage-orientation-plan.html.

The Fáilte Ireland scheme is part of the National Tourism Development Authority’s work to drive a better regional spread of overseas and domestic visitors and spend.

Through the scheme, which was launched earlier this year, every Local Authority in the country had the opportunity to bid for funding of up to €500,000 to develop a town in the county to enable it to improve its tourism offering and make itself more attractive to visitors. The Local Authorities will also provide funding for their projects.

With Fáilte Ireland research consistently showing that attractive towns and cities are key motivators for overseas holidaymakers coming to Ireland, the new scheme will provide funding to Councils to enhance public spaces such as squares, streetscapes and markets in a way that will engage tourists and enhance their experience in key towns.

This could include spaces for food and craft markets, areas for town centre events, public art displays as well as orientation and signage to help visitors explore a town’s local heritage.

Fáilte Ireland’s CEO Paul Kelly said: “The towns which reap the greatest benefits from tourism and schemes like Destination Towns are those where all local tourism players work together - from Local Authorities and businesses to the communities themselves, each complementing another’s efforts to create a full and appealing offering for their area.”

This is the first scheme of its kind and marks a step-change in the way Fáilte Ireland is working with local councils to drive tourism to regions across the country. Key project aims are to:

Welcoming the announcement Deputy Fergus O’Dowd said he was absolutely delighted that Drogheda has received this new status from Fáilte Ireland.

“As we know Drogheda is a great example of a medieval Irish town and St. Laurence's Gate is famous across Ireland as a symbol of our town.

“Now Drogheda is a thriving modern town with a plethora of fine pubs, restaurants and hotels.

“Tourism is a unique industry in terms of its ability to boost local job creation and sustain rural communities.

“While this new funding will benefit everyone in the town, I would like to take a moment to acknowledge to enormous efforts of local volunteers who contribute their time and efforts to enhancing Drogheda.

“The fact the town does well in Tidy Towns year after year is testament to this.

“I hope this new funding will assist in attracting more visitors to our town, so they can appreciate all Drogheda has to offer,” the Fine Gael TD said.

Sinn Féin TD Imelda Munster also welcomed today’s announcement. “The, however I am delighted that Louth County Council’s proposal was given the go ahead, and that this funding has become available.

“Those of us who live in Drogheda are well aware of the town’s potential as a tourism destination. The town proved itself in the last two years when we hosted Fleadh Cheoil na hÉireann, which saw the biggest visitor numbers in the history of the event.

“Tourism is very important to Drogheda, and this funding will go a long way in improving existing tourist attractions, as well as promoting tourism.

“I look forward to seeing further details when they are finalised in January, and I am sure that the town will reap the rewards of this funding in the coming years”.