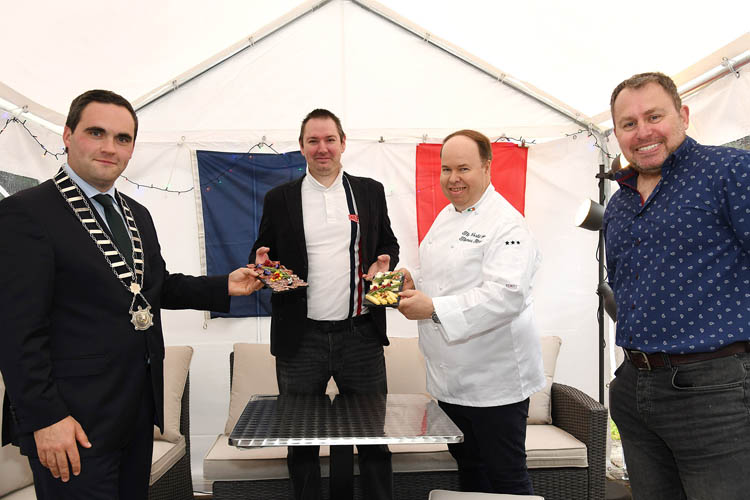 Big celebration planned for next month

It was a case of "ou la la, and Mon Dieu, c’est magnifique" in Termonfeckin last Tuesday as a small group of people gathered at The World Gate Restaurant at An Grianan to launch the first ever Bastille Day celebrations in the area.

Although Bastille Day, which is the anniversary of the storming of the Bastille fortress where political prisoners were held, takes place on 14 July, the celebrations in Termonfeckin will not take place until August 22 due to Covid-19 restrictions.

Speaking at last week’s launch the Mayor of Drogheda Councillor Kevin Callan said he was delighted to have a first official marking of the French Holiday and that he was also very happy to see that the World Gate will, in line with the phased re-opening, be marking the event on Saturday 22nd August.

“Drogheda has many connections to France including our twin district of Saint Mande in Paris where we have twinned now for ten years” Callan said.

Stan d'Anthouard told Drogheda life that the World Gate Restaurant in partnership with the Mayor, AIB Bank and its local suppliers will organise a French banquet with a musical and recreational atmosphere.

“There will be tastings of great French wines as well as local beers” he said, adding that many personalities will be present.

A total of 150 people will be able to taste starters, main courses and desserts – all done in with social distancing requirements in mind, as there is a large outdoor area available.

Stan has lived in Ireland, his adopted country, for 12 years but Head chef Thomas has been here just eight months during which time he has discovered wonderful local products and suppliers and applied French culinary techniques from the greatest Michelin-starred restaurants.

“Without pressure and gradually, a climate of trust is established with the guests. Every day is a joy in Ireland” he said.

The World Gate Restaurant outdoor party on the 22nd of August will include wine and beer tasting, hot and cold buffet dishes, live music and hopefully a lot of fun and chat with guests from Drogheda’s twin town of Saint Mande in attendance with proceedings getting underway at 5.00pm.

Tickets are selling for €35 and are available by calling into the restaurant, by phone on 087 149 3688 or online at https://paypal.me/pools/c/8qTyUQV3YP