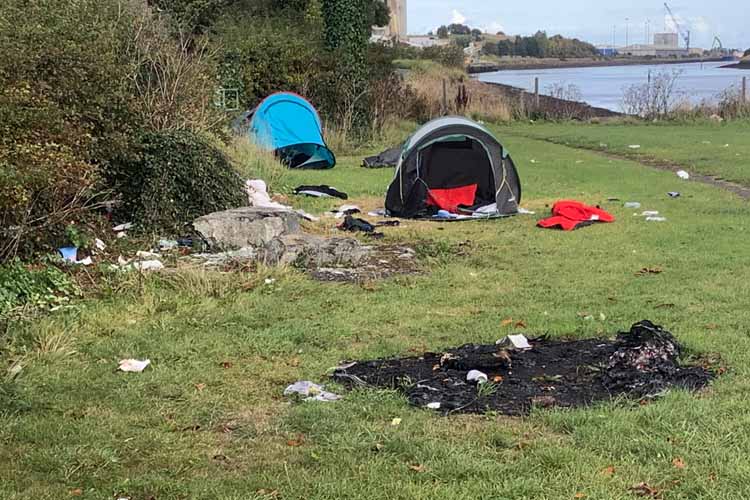 Donor's Green is in a mess.

Anyone who has been down at Donor’s Green of late can’t help but notice that someone has been dumping, starting fires and using area as a toilet.

Independent Councillor Kevin Callan certainly has noticed and has slammed those responsible saying they don’t care about the people who have to clean up after them.

Councillor Callan told Monday’s Borough meeting that he had received numerous complaints from local people who were shocked at the levels of illegal dumping and the general mess.

“The issue here is that some people are using the green area for purposes it is not intended for”.

“During the pandemic this park, like so many other public spaces, was extremely important to people and played a big part of their day, be it with their family, friends or family pets.

“There is no excuse for the volume of alcohol cans dumped in the ditches and hedges and the rubbish being thrown all over the Park. The Park is maintained by the Port for the public as an amenity, it is not a public toilet and it is not a dumping ground.

Councillor Callan has asked the Council to liaise with the Port Company to see what action can be taken to rectify the situation.

“Those who carry out this disgusting and illegal activity never consider the people who have to clean up after them and the people they put out, be they council staff, volunteers or residents” he said.

“This park is a public amenity not a dump or a public toilet. We will now clean up after those who could not care less as to the consequences of their actions.

Council officials confirmed to Councillor Callan that their homeless support section had reached out to those who were in tents on the green and some had agreed to leave the area.