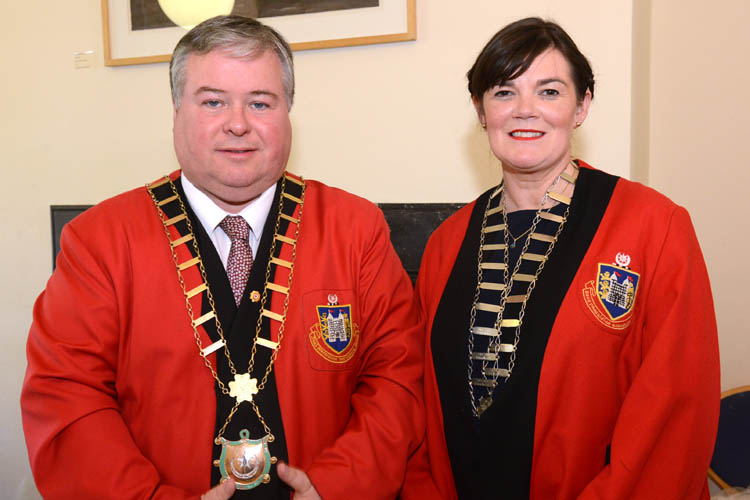 Councillor Paul Bell was this afternoon elected by the members of the Borough District of Drogheda as the Mayor of Drogheda for the fourth time in his political career and, in a double win for the local Labour Party, newcomer to local politics Michelle Hall was elected Deputy Mayor.

Michelle Hall was proposed by Councillor Paul Bell and seconded by the new and only Fianna Fail Councillor James Byrne. Independent Councillor Paddy McQuillan nominated himself for both positions but was not seconded for either.

In his acceptance speech the incoming Mayor said he was “humbled and privileged” to be elected first citizen of this historic town for the fourth time. “Let me say this, each occasion is just as special s the first” he said.

Mayor Bell paid tribute to his predecessor Frank Godfrey who lost his seat at the recent local elections but who was in the public gallery today. “I wish Frank well in his future endeavours” Bell said.

He also wished outgoing councillors who had not been returned – Councillors Kenneth Flood and David Saurin of Sinn Féin and Richie Culhane of Fine Gael. “I wish them all well in whatever future path they choose” he said.

Addressing the councillors he said that it would be his intention and commitment to work hard with each and every one of them to represent the citizens of the town.

“My commitment will be to work with you in facilitating effective and inclusive meetings of this council and to consult with you on matters which you have a right as elected representatives to have a say on.”

“In return I ask for your support and commitment throughout my term of office so as to ensure that we work together for our citizens and our town.”

He said that there were many challenges facing Drogheda and he asked that the Councillors would work together to confront and resolve them.

He said that the success of the 2018 Fleadh had proved that by working together the town of Drogheda can achieve anything. “I am confident that this year we will build on that that success.”

He also asked Councillors for their united support to find a solution to other pressing issues that required urgent attention such as the housing crisis. He also wanted to see a more respectful attitude adopted to Council tenants and a speedier response to house repairs.

Bell said that he wanted to see support for the ongoing campaign to achieve city stratus for Drogheda but equally important was to achieve a return to the powers formerly held by the Drogheda Borough Council.

“In committing my support to this objective I believe my other equally important objective must be to return to the power lost to our Borough Council under the reform of local government and I believe that this objective can be delivered if we and other councils demand it. This we must work on together as a key demand by all our citizens.”