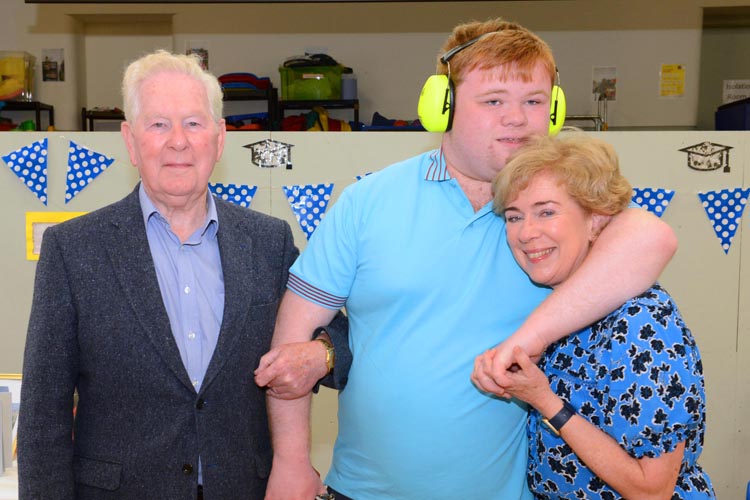 Drogheda’s ABACAS Special School for Children with Autism and Complex Needs held a moving graduation ceremony on Friday last when four students took a massive stride forward to the next stage of their lives.

ABACAS is one of Drogheda’s success stories and always a pleasant place to visit. From the friendly and dedicated staff right through to the wonderful sensory garden out the back it all contributes to the most important message anyone could hear: “We love you and we care about your future.”

Like young birds summoning up the courage to finally leave the nest and make their way in the world, last Friday’s graduates must have had mixed feelings with their excitement tinged with a bit of apprehension also.

Jacinta Walsh told Drogheda Life that the graduation Day was emotional for all concerned but it was also a great success with sandwiches from Stockwell Artisan Foods and a giant cake provided by McCloskey’s Bakery being a big hit, especially with the younger people.

The graduates will not be going their separate ways straight away however. Many of them will now advance to the Praxis Care hub on the Ballymakenny Road and they will also continue to attend the Autism Support Louth&Meath youth Club which is held in the school.

Even before that, they will be back at the ABACAS premises for the Summer School which starts on Monday!

The parents of these very special young people were also emotional that their children had reached this important milestone. They’ve watched, some of them for 14 or 15 years, as their children developed into adults with a mix of skills and characteristics under the expert guidance of the ABACAS staff.

One parent, Ged Rafferty, told Drogheda Life that he and his wife Ann cannot begin to express their gratitude and appreciation to the incredible Management and Staff for all they have achieved with their son Niall since he was honoured with a placement in ABACAS back in 2012.

“Everyone involved in ABACAS school are so dedicated to their vocation and have given all they have to enhance both the life of Niall and as a result, his family and all the extended community who are all part of Niall's journey” he said.

He sent a special thank you to Jacinta Walsh who he dubbed the best woman in Ireland. “She has opened doors for us all” he said. “Doors that were firmly closed - so closed they didn't even exist before Jacinta smashed them open.

“We have all been standing on the 'shoulders of a giant', with a giant-sized heart ever since - a LEGEND!!! Niall has had the BEST teachers over the years and especially an extraordinary woman, Niamh Byrne who is another LEGEND!!

“To the wonderful Michelle, the principal of ABACAS, never forgetting Maria who was the principal when Niall started. To all the behaviour specialists who gave so much to us - from Juliette right through to the present lady Anna.

“You have all played an integral role in Niall's development over the years - the magnificent Special Needs Assistants, too many to mention, but you are all absolutely LEGENDS too!!! And never forgetting all the bus escorts, over the years - especially Trish, who is an absolute class act - another LEGEND!

“As a family we were overwhelmed at the beautiful, magnificent celebration that you gave us on Friday. It was extremely emotional for us all in the best possible way!!!

“A sincere and heart-felt thank you from the bottom of our hearts for all you have given us and the most important gift you gave us was yourselves and handing us back the happiest young man I know!!! You are not far from receiving your halos - God bless you all.”