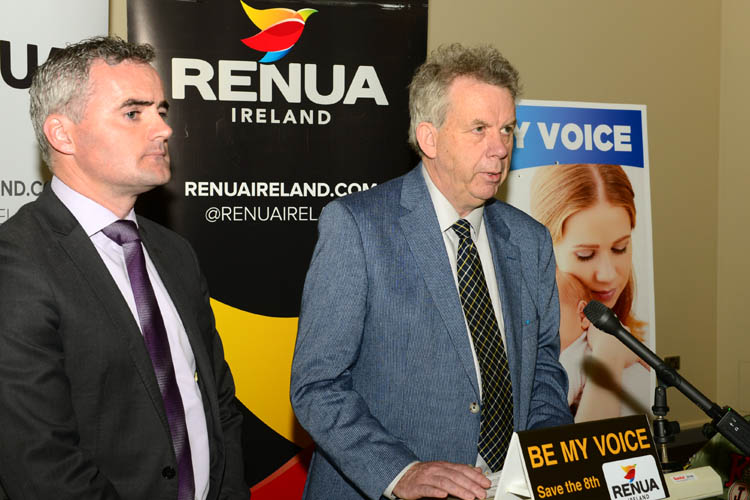 Renua Chairperson Michael O’Dowd speaking at the launch of his party’s campaign to save the 8th Amendment in the dHotel this morning. On left is the Renua Party Leader John Leahy.

Renua Chairperson and Louth Dail candidate, Michael O’Dowd, has today called for a No vote in the upcoming referendum becaue he said, "abortion destroys the rights of people with disabilities.’’

At a press briefing held this morning in the d Hotel to launch Renua’s campaign to save the 8th Amendment entitled ‘’Be My Voice’’ O’Dowd, who is the party’s Spokesperson on Disabilities, said:

“Speaking as a parent of a son with Down Syndrome I’m calling on the people of Ireland to protect our Irish values and our respect for human rights and vote no in the referendum to abolish the 8th Amendment.”

O’Dowd told Drogheda Life that having canvassed the whole of the Drogheda area, and much of East Meath, the response Renua has been getting is pretty much 50/50. “A large number of people are still undecided and they will be crucial to the result” he said.

“Many people find it difficult to discuss the topic of abortion and are slow to express an opinion until we start talking to them and drilling down into what exactly is being proposed.

“Ireland has a commitment to the Convention of Persons with Disabilities to ensure the full and equal rights, including that of the right to life, by all persons with disabilities.

“The repeal side’s message has been characterised by misrepresentations, ego and downright lies on this issue.’’ Mr O’Dowd said.

‘’Our key belief is that abortion damages our unique culture of respect for human rights and we need to protect the Irish values which have been entrusted to us.

“This is why we have chosen the campaign theme of ‘Be My Voice’. We will be standing up and giving a voice to the unborn child and children with disabilities, the most vulnerable in our society.

“From now until the 25th May, we will be taking this message to the people of Ireland. In the campaign so far, there has been a huge level of support in the county and we’ll be pushing hard for a No vote right up to the wire.’’

Renua leader John Leahy accused Taoiseach Leo Varadkar of ‘’presiding over the destruction of Ireland’s historical respect for human rights’’ and he challenged Simon Harris to publicly debate the issue.

‘’Renua is calling Health Minister Simon Harris to come out and state his case for a Yes vote. He has been downright misleading to the Irish people on this issue and we will give him the opportunity to put the record straight. If he wants to spread more lies on this issue then he should do it in a public debate.’’

Young Drogheda woman Maria McCabe, who suffers from Spina Bifida and is an activist for the rights of people with disabilities, told the press conference that she would be voting No.

"People with disabilities need to be protected and their lives respected," she said. "There is support out there, which wasn't there 30 years ago when I was born" she said.